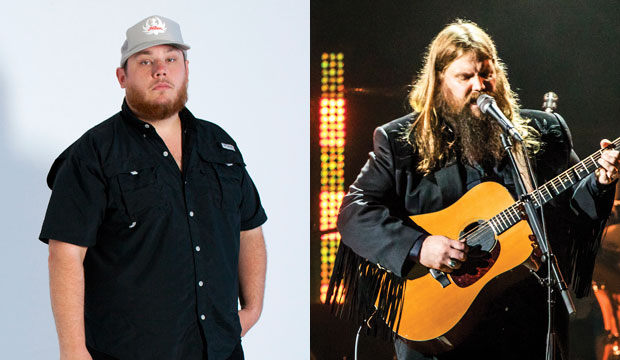 Luke Combs is having the kind of crossover success we rarely see for country artists. His second album “What You See is What You Get” just returned to number-one on the Billboard 200 a year after its original release thanks to a deluxe reissue. And a new song from that collection, “Forever After All,” debuted at number-two on the Hot 100 singles chart, which is the highest debut for a male country artist in history. Might he also be on the verge of a Grammy breakthrough too? Chris Stapleton made a similar splash a few years ago.

Stapleton broke out with his debut solo album, “Traveller,” in 2015. First he took the country music industry by storm, winning three CMAs that fall including Album of the Year and Male Vocalist of the Year on his first ever nominations. So it was clear he had tons of industry esteem right out of the gate. Then he earned an Album of the Year bid at the Grammys and won Best Country Album and Best Country Solo Performance for the title song. Five years later “Traveller” is four-times platinum and still on the Billboard 200.

Combs has also become a mainstay on the charts. In addition to “What You See” rising back to the top, his 2017 debut album “This One’s for You” jumped back into the top 20 on its 178th week. And he has also been embraced by his country music peers, winning CMAs for New Artist of the Year in 2018 and Male Vocalist of the Year in 2019, plus six more nominations in 2020. And at the ACM Awards earlier this fall, he won Album of the Year (“What You See”) and Male Artist.

Will all that translate to Grammy love like it did for Stapleton? As of this writing he’s a 100/1 underdog for Album of the Year based on the combined predictions of Gold Derby users. But he’s the front-runner for Best Country Album with 6/1 odds. Might we be underestimating him in the general field?

The recording academy nominated him for Best New Artist in 2019 and Best Country Duo/Group Performance for “Brand New Man” with Brooks and Dunn in 2020. But the last year has eclipsed those past successes for Combs. So the nomination review committee that makes the final Grammy decisions for Record, Song and Album of the Year might single him out as country’s top representative at these awards.