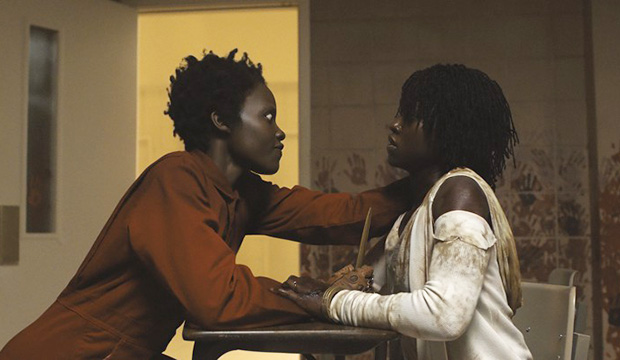 No need to pull out your scissors just yet – voting for the 92nd Academy Awards is still underway, and the nominations won’t be unveiled until Jan. 13. So, don’t worry, voters can still check off Lupita Nyong’o for giving not one, but two, searing performances in Jordan Peele’s Us.” Nyong’o is already a Best Supporting Actress Oscar winner for Steve McQueen’s “12 Years a Slave” (2013) and could finally snag her second career nom, this time in Best Actress.

Of her two her characters in “Us,” we first meet Adelaide Wilson, a wife and mother of two, who is scarred by a 1986 incident in Santa Cruz; visiting with her parents, she wandered off into a funhouse, where she encountered a doppelgänger of herself, Red, in the hall of mirrors. In the present, Red then returns to terrorize Adelaide and her family. At the end of the movie, however, it’s revealed that the altered, estranged girl who returned to her parents in 1986 was the doppelgänger, making the scissors-wielding, red overalls-dressed figure the real Adelaide.

At first, Nyong’o plays Adelaide as reticent and worried, with a presence that etches the story of an injurious past, but quickly morphs her into a perturbed and violent character. As Red, on the other hand — wide-eyed, initially expressionless and robot-like — she dominates the screen with an unsettling presence that is only amplified by her guttural, husky voice, which the actress based off the condition spasmodic dysphoria. But as Red deconstructs the torture that the Tethered (the other doppelgängers) endured underground, forced to replicate their above-ground counterparts’ every action, Nyong’o infuses this seemingly monstrous figure with tangible humanity.

These nuances are mimicked in Nyong’o’s physicality: Red is thoroughly skilled, rehearsed and measured, while Adelaide is instinctive, erratic and even thuggish — specifically in the face-off between them toward the end. By the time the credits roll, Nyong’o has crafted two distinctive performances for two diametrically opposed characters, but simultaneously managed to blend them just enough, and just at the right moments, to make the final twist feel both natural and earned.

The one-two punch of showy performances is the type of transformative turn the academy tends to gravitate toward — even if mostly in form of an actor portraying a real-life person. Actors who played multiple roles in the same movie and went on to snag Oscar bids include Nicolas Cage for “Adaptation” (Best Actor, 2002), Meryl Streep for “The French Lieutenant’s Woman” (Best Actress, 1981), Peter Sellers for “Dr. Strangelove” (Best Actor, 1964) and Charlie Chaplin for “The Great Dictator” (Best Actor, 1940); Lee Marvin (Best Actor for “Cat Ballou,” 1965) and Joanne Woodward (Best Actress for “The Three Faces of Eve,” 1957) are among those who won.

As of this writing, Nyong’o has racked up 19 different critics prizes — including Best Actress from the New York Film Critics Circle — well ahead of projected Oscar frontrunners Scarlett Johansson (“Marriage Story,” 11 wins) and Renée Zellweger (“Judy,” seven wins), who rank behind Nyong’o in second and third place. While these groups have little to no membership overlap with the academy, they’ve given Nyong’o a much-needed boost en route to the Oscars, given that “Us” premiered in March.

Nyong’o has also been shortlisted at the Critics’ Choice and Screen Actors Guild Awards – the two groups that gave her the win for “12 Years a Slave.” Her snub at the Golden Globe Awards — where she was beaten by Jennifer Lawrence (“American Hustle”) in 2014 — might be no cause for worry as the Hollywood Foreign Press Association shares no members with the academy. SAG-AFTRA, on the other hand, does, which makes her inclusion all the more important as it indicates significant support from actors.

SEE What about ‘Us’? It could make Lupita Nyong’o the fifth actress to complete the lead-supporting SAG Award double

Even though this would be Nyong’o’s first time back at the Oscars since her victory, she has since established herself as a versatile actress with roles in blockbusters like “Star Wars” — just recently, “Star Wars: The Rise of Skywalker” — and one of last year’s Best Picture nominees, “Black Panther” (2018), as well as in smaller features like “Queen of Katwe” (2016) and last year’s “Little Monsters.” If she were to be nominated for “Us,” she’d also be just the fourth black actress to score a second career nomination, following two-time nominee Whoopi Goldberg, and three-timers Viola Davis and Octavia Spencer.

Although horror movies aren’t always academy fare, Nyong’o could follow in Daniel Kaluuya’s footsteps, who in 2018 bagged a Best Actor nom for Peele’s directorial debut “Get Out.” Although “Us” might not receive as much across-the-board support as its predecessor, don’t be surprised to at least see it pop up in several below-the-line races, particularly Best Original Score, with composer Michael Abels’ inclusion on the shortlist. Also, bear in mind that outside of Johansson’s “Marriage Story,” none of the other predicted Best Actress nominees’ movies appear to be surefire locks in the Best Picture race.

Our combined odds are currently forecasting nominations for Zellweger, Charlize Theron (“Bombshell”), Johansson, Saoirse Ronan (“Little Women”) and Awkwafina (“The Farewell”); Cynthia Erivo (“Harriet”) and Nyong’o are both on the outside looking in, sitting in sixth and seventh place, respectively.