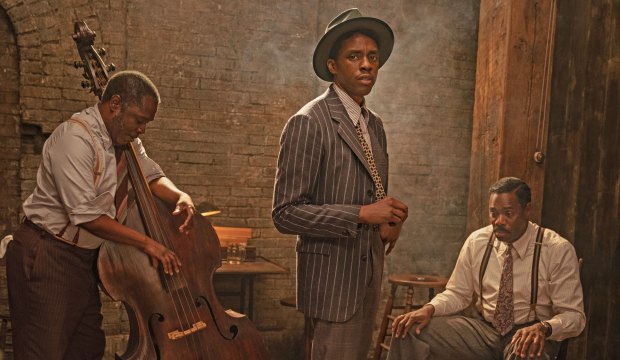 “He made such an indelible impression that I think with this film it seals the deal,” said actor Colman Domingo about his “Ma Rainey’s Black Bottom” co-star Chadwick Boseman, who died in August after a long battle with colon cancer. “He was a mighty, mighty king, and it wasn’t even just his work. It was his work ethic, his spirit, and what he tried to do to move the dial on humanity, academics, and education.” Domingo and his fellow cast members discussed the film after a virtual AFI preview screening on November 14.

Adapted from a play by August Wilson, “Ma Rainey” stars Boseman as Levee, a headstrong trumpeter who clashes with the title blues legend (Viola Davis) as well as his fellow band mates (Domingo, Glynn Turman, and Michael Potts) during a contentious recording session in 1927 Chicago. It was the last film Boseman ever made.

Domingo especially remembers the overwhelming emotion that went into shooting a tense argument scene: “[Director George C. Wolfe] calls cut, and we just embraced each other and sobbed … We were all trying to collect ourselves, and we didn’t know what actually was in the room … and what was the underpinnings of that scene or that emotion. It was a whisper at first, and then it was a roar. That man had this fight in him to the very end. Now it makes sense in hindsight why he’s played so many kings in rapid succession, as if he knew he didn’t have enough time on this Earth.”

“I think audiences are going to see this as his finest performance,” Potts argues. And Davis adds that, in an industry full of “frauds” and pretenders, “this is a man who was an artist — an artist meaning you have to let go of your ego, your vanity … All you have in the end is your integrity. He was just one of those, and they’re a diamond in the rough in this business. You could have a 50- or 60-year career and never work with a Chadwick Boseman.”