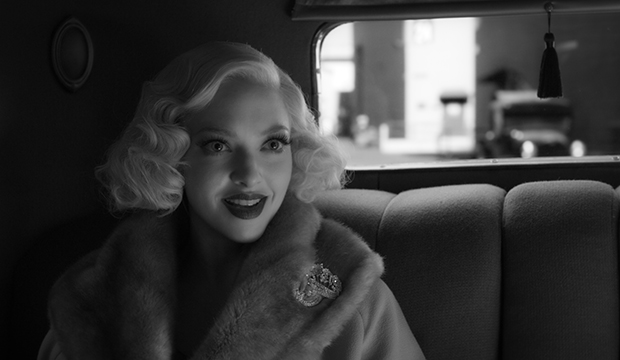 It was apropos that Ben Mankiewicz moderated a recent zoom Q&A with Amanda Seyfried and David Fincher (“The Social Network”) for the director’s latest film “Mank,” starring Gary Oldman as the caustic screenwriter Herman J. Mankiewicz. The prime-time host of TCM is also the grandson of Mank. a fact, he says “has always been and continues to be surreal.”

Penned by the filmmaker’s late father Jack Fincher, the black-and-white drama revolves around Mank remembering his turbulent history in Hollywood as he races to finish the first draft of Orson Welles’ 1941 masterpiece “Citizen Kane.” The Netflix film is garnering a lot of Oscar buzz including for Seyfried for her portrayal of Marion Davies, the longtime mistress of the powerful William Randolph Hearst, the inspiration for the character of Kane.

Here are excerpts from the lively, fun hour-long conversation:

Casting Amanda as Marion
David Fincher: There was a point in the process where we were looking for somebody to play Marion and Amanda’s name came up. It was like ‘That seems obvious. Why don’t we sent her the script and see what she would say?’ So, the script was sent and then I ended up on a call, late one night whilst she was filming another project. I was, sort of, doing what I tend to do, which is talking, rambling in circles as I was kind of presenting my wares. I didn’t want it to feel like she had to have delved deeply or even had read the script in preparation for this. It was my intention to kind of sell what I was trying to do.

Working for David
Amanda Seyfried: I’d never felt as safe on a set playing a role that was incredibly intimidating. It’s so freeing when you’re working with someone who knows what he or she wants the movie to look like and feel like. He knows the story inside and out. He’s so passionate about it. And of all the things you are David, you’re also one of the best at telling a story. I like to be told stories by you as an audience member, so the fact I got to help you tell a story in a way that made me feel less concerned about my skill level, less concerned about my insecurity, less concerned about all the noise that an actor, an artist, brings to their work. I mean there was an ease there. I mean not to say it was easy. The challenge was there every day, all the time. You know what you want. You’re there to tell a story the way you want to tell it. It’s like we are all have to show up and be 120%. What a gift.

DF: This is something that I fight for. I’m always willing to give up a day with the helicopter or a day with the crane in order to have three more takes of each set up. You find people that you believe in and then you just overwhelm them with your belief in  them and give them the opportunities to play.

AS: The collaboration aspect was insane. I felt like ‘Oh, you were really listening to where I was coming from.’ We were actually creating something together to support that story. I’m sure many people are intimidated to work with you because you are a genius. You make insanely awesome movies. I didn’t have any expectations, but it’s amazingly collaborative when you’re actually there.

SEE ‘Mank’ : Who are the true life people in David Fincher’s Netflix film about ‘Citizen Kane’?

The BFF non-sexual connection between Marion and Mank
AS: Gary and I have a thing. We have a past. There’re some good vibes being shared between Gary and myself. I think that part of the rapport definitely helped us with the Marion Mank relationship. I think it was definitely of the part of that foundation. It was very easy to find. But also, the writing between the two characters, you know right when you read the script there’s just this immediate moment where they’re ‘Oh, I see. I see myself in you. We can be honest with each other. I trust you. We’re cut from the same cloth.’

DF: Obviously, gin was something that they shared. This is a little bit of the secret society of the alcoholic. But it’s also he sees in her somebody who has absorbed a lot of ridicule and has made certain compromises to have a life that is better. I think he could relate to that. I think the idea of being a monied WGA whore…certainly that was his perspective on a lot of the work he did.

Preparations to play Marion
AS: I had to watch [her movies] for some mannerisms and stuff like that. Listen, what I was watching was what she was doing, it was her performances, so I wasn’t getting necessarily the real her. But of course, I do believe that a lot of actors can’t hide their essence. I think my favorite type of genre as an actor is comedy. I really think she was very skilled, really funny and smart in the choices she made. And like the best of actors there was a lot going on there.

Challenges honoring the script
DF: It’s funny because my dad was an extremely curious person and really had a different view of screenwriting than [Herman Mankiewicz]. He had a much more sort of ‘Singin’ in the Rain’ understanding of the movies and was nowhere near as sort of cynical. He was really attentive to the era of Algonquin or Algonquin-adjacent sort of writing. But there are moments in the script that I personally would have thought ‘Well, I don’t know that we need Rita and this sub-plot about Ian being shot down at sea in Norway.’ But he was fairly adamant that he wanted to write a movie that took place just pre-World War II. The trappings of that were important to him that it be a little anachronistic, maybe a little wide-eyed and a little Pollyanna. In the end, we decided to keep that stuff and try to embrace it.

Why Fincher didn’t reach out to the Mankiewicz family
DF: A lot can happen, especially in a family this large. I think it would have been impossible to take one person’s note and ignore the other. I really didn’t want to begin the journey by stepping on the wrong toes. But also, it’s impossible to talk to people about something that is this intimate to them. In the end, I was just trying to make sense of a guy who was so caustic about Hollywood and yet, obviously loved it. That was the push pull. I think that I felt if I really got involved [with the family] we would be opening this process up to a kind of scrutiny that probably it couldn’t survive and still have momentum.