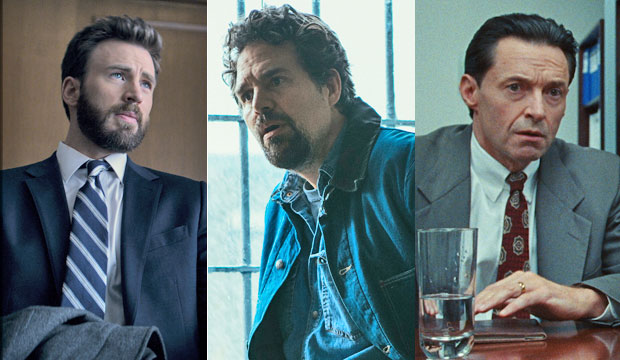 The Marvel Cinematic Universe has expanded so drastically in the last decade that you can’t swing a cat in Hollywood without hitting an actor who has played a superhero. So maybe it shouldn’t be surprising that several comic book crusaders are in the running for Best Movie/Limited Actor for new roles on the small screen. There’s a chance this category could turn into another Marvel civil war.

SEERosie O’Donnell (‘I Know This Much Is True’): ‘Giving your heart without getting it broken’ for her [EXCLUSIVE VIDEO INTERVIEW]

The current front-runner, according to the combined predictions of thousands of Gold Derby users, is Mark Ruffalo. Kind of like how he has played dueling personas as Bruce Banner and the Hulk on the big screen, he now stars in the HBO limited series “I Know This Much is True” as twin brothers with a complex relationship as they struggle through mental illness and personal tragedies. Ruffalo has an Emmy already: he won Best TV Movie in 2014 as an executive producer of the telefilm “The Normal Heart.” But this would be his first victory for acting.

Nipping at Ruffalo’s heels is Hugh Jackman, who rose to fame as “X-Men” hothead Wolverine (the “X-Men” movies weren’t part of the Disney-owned MCU franchise, but they’re still based on Marvel comic books). Now he’s an Emmy contender for the movie “Bad Education” where he stars as a corrupt school superintendent. Like Ruffalo, he’s already a past Emmy winner, but not for an acting role: he took home the gold in 2005 for emceeing the 58th Annual Tony Awards.

They may be joined by the first Avenger himself, “Captain America” star Chris Evans. He played the do-gooder for the better part of a decade, but he hasn’t yet had a breakthrough moment with industry awards voters. That could finally happen with his Apple TV+ limited series “Defending Jacob,” in which he plays a district attorney whose teenage son is accused of murder. As of this writing he doesn’t rank as high in our Emmy odds as Ruffalo or Jackman, but Emmy Experts Tim Gray (Variety) and Lynette Rice (Entertainment Weekly) are currently predicting him to be nominated.

What’s funny is that if Evans, Ruffalo and Jackman are all nominated, they could face off against an actor who is actually playing a superhero in this race: Jeremy Irons as Ozymandias in HBO’s “Watchmen,” based on Alan Moore‘s classic graphic novel. So just how many avengers will assemble in this race?