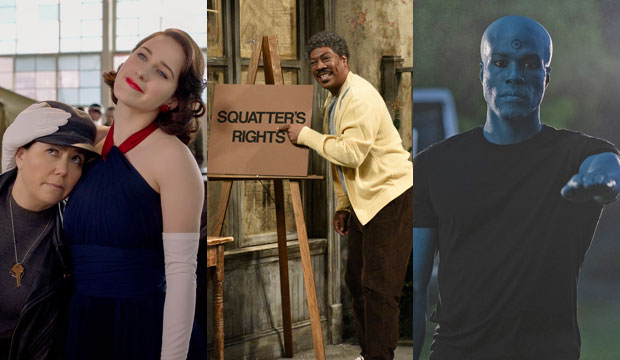 The Prrimetime Emmys telecast is on Sunday night, September 20, on ABC, but by then most of the awards will already have been handed out. The Creative Arts Awards are where the lion’s share of categories will be announced. So who will win? We’re predicting 29 categories that will be presented between Monday, September 14, and Saturday, September 19. There are many, many more prizes than that up for grabs, but scroll down to see our official predicted winners listed by series; these predictions are based on the combined forecasts of over 1,200 Gold Derby users as of this writing.

“The Marvelous Mrs. Maisel” is nominated 20 times overall this year, more than any other comedy, and we’re predicting three wins for the show: Best Comedy Guest Actress (Wanda Sykes), Best Music and Lyrics (“One Less Angel” by songwriters Thomas Mizer and Curtis Moore) and Best Music Supervision. But the lavish period series could come away with more hardware than that in other craft categories honoring costumes, production design, cinematography and more.

We’re also anticipating three wins for “Saturday Night Live”: Best Comedy Guest Actor (Eddie Murphy), Best Variety Series Directing and, of course, Best Variety Sketch Series, which it has won for the last three years in a row. After 45 years on the air, “SNL” has won more Emmys than any other series in history, and with 15 total nominations this year it looks poised to extend that record haul.

The HBO limited series “Watchmen” has more nominations than any other program in any genre (26), but we’re not predicting too many of the categories it’s up for over Creative Arts week. Nevertheless, we’re predicting victories for Best Main Title Design and Best Music Composition for a Movie/Limited Series. That composing award would go to Trent Reznor and Atticus Ross, who would then only need a Tony to complete their EGOT grand slam of showbiz awards. But look for “Watchman” to potentially clean up in many other craft categories as well.

See who else is tipped to win below. Who are you rooting for? And who do you think we might be underestimating?