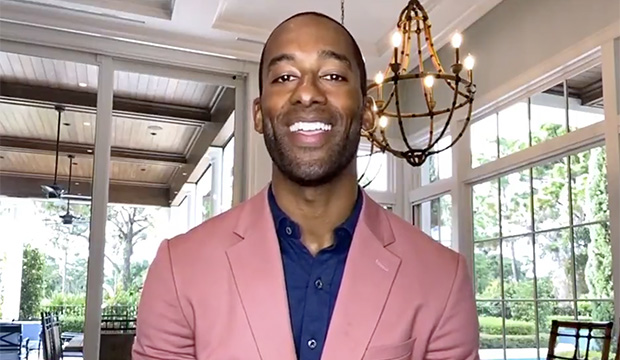 After 40 seasons and 18 years, the “Bachelor” franchise has finally cast its first male black lead as Matt James will headline Season 25 — quite an upgrade after initially being cast on Clare Crawley‘s upcoming season of “The Bachelorette.”

“My first reaction was, does this mean I don’t get to meet Clare? Because I was looking forward to meeting her,” James told “Good Morning America” on Friday after his casting was announced (watch below). “I had set aside all this time and we had gone out to California and were called back with quarantine, so I’m super excited for her and her season, but I’m looking forward to meeting her eventually.”

Getting serious, the 28-year-old says it’s an “honor” to be the first black Bachelor. Public outcry for one had surged in the past few weeks in the wake of the Black Lives Matter movement following George Floyd‘s death. Rachel Lindsay, the first black Bachelorette, had long called out the franchise for its lack of diversity, and last week said she would cut ties if changes weren’t made. On Monday, a fan petition launched demanding a black Bachelor and laid out 13 steps for the franchise to take to fix its race problem.

Matt James on becoming the @BachelorABC’s first-ever black leading man: “I think it's a step in the right direction.” https://t.co/NNfmVuXLKI #TheBachelor #BachelorNation pic.twitter.com/dvP5Qr3gfH

“I think [my casting is] a step in the right direction. When Rachel speaks, we listen,” James said. “She has a very important voice in all this, being the first black woman, person of color, to [be the] lead, so I think we’re all following suit in that conversation. Hopefully this is the first of many black men to be in the position I’m in now.”

That it’s taken nearly two decades for a black man to lead “The Bachelor” is quite a blemish, but James believes it’s better late than never. “I don’t think it’s ever the wrong time to do the right thing. ‘Too little too late’ for me is this happening, and we can’t have change until we put that first foot forward,” he explained. “And that first foot forward for the ‘Bachelor’ franchise is having a black lead, so I’m excited to take on that role.”

James, who’s the roommate and business partner of “Bachelorette” runner-up Tyler Cameron, says he does not feel pressure being the first black leading man. His goal is to open people’s minds to “diverse love stories.” “Hopefully when people invite me into their homes on Monday nights, they’re gonna see that I’m not that much different from them and that they see that diverse love stories are beautiful,” he said. “I think a lot of people are in that situation where they’re uncomfortable dating outside their race or they’re uncomfortable being in that position. It’s a conversation starter for a lot of people, and hopefully that paves the way for a lot of diverse love stories because those are beautiful stories.”

As for what he’s looking for in a woman, the real estate broker says his future significant other will have to live up to his mother. “I’m looking for qualities that my mom embodies, and that’s [being] selfless, honest, caring, compassionate,” he shared. “Those are qualities found in women in all shapes, sizes and races. It’s not a black or white thing, so I’m hoping that when that limo pulls up, there’s a lot of diversity and I see every type of woman coming out of that limo.”