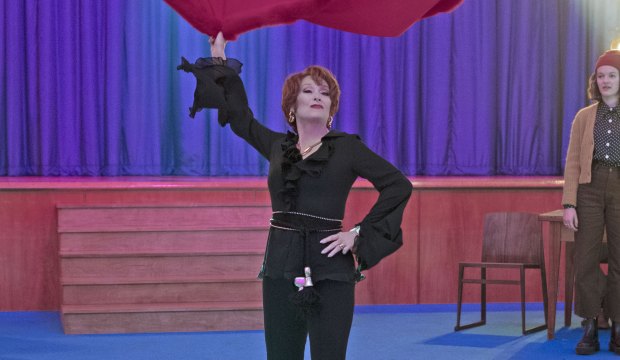 Since the Netflix movie musical “The Prom” started screening for press, Meryl Streep‘s odds in the Best Actress Oscar race have been rising. Could she receive a record-extending 22nd nomination?

Streep plays a vain but washed-up Broadway actress trying to revitalize her career by latching onto a political cause, specifically the plight of a teenage girl (Jo Ellen Pellman) whose school community tries to stop her from taking her girlfriend to the prom. Streep gets to show off her song-and-dance skills in a number of musical numbers, and it wouldn’t be her first Oscar nomination for a musical performance: she earned a Best Supporting Actress nom for the Sondheim adaptation “Into the Woods” (2014), and she contended for Best Actress for pretending to sing badly in “Florence Foster Jenkins” (2016).

As of this writing she’s one of the top 10 contenders for Best Actress, according to the combined predictions of thousands of Gold Derby users. She currently gets 42/1 odds, but that’s a marked improvement from her 50/1 odds on November 15, which itself was better than her 75/1 odds on November 1. So things are moving in the right direction for her. There are currently three Expert journalists betting on her to crack the top five: Tim Gray (Variety), Christopher Rosen (Vanity Fair) and Jazz Tangcay (Variety). She’s also predicted for a nom by three of the Top 24 Users who got the highest scores predicting last year’s Oscar nominations.

Broad comedic performances aren’t usually the Oscars’ cup of tea, but this is Meryl Streep we’re talking about. And the role has a proven awards track record: on Broadway, it earned a Tony nomination for Beth Leavel. This wouldn’t even be the first time Streep has turned a Tony-nominated character into an Oscar-nominated one. A 2002 “Into the Woods” revival earned Vanessa Williams a nomination for the Witch role that Streep was later nominated for. And Streep also earned an Oscar nom for taking over Cherry Jones‘s Tony-winning role as a suspicious nun in “Doubt” (2008).

And in an emotionally, politically, economically turbulent year, “The Prom” could especially appeal to voters as one of this year’s few unequivocally upbeat contenders. So keep an eye on the Oscars to potentially sing Streep’s praises yet again.