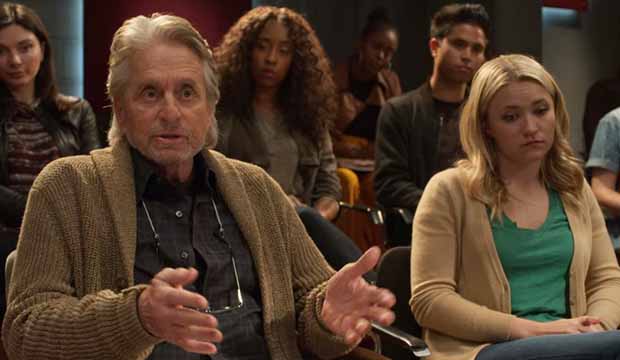 “I can still deliver the mail,” Michael Douglas’ Sandy Kominsky euphemistically shares with an old flame in “A Libido Sits in the Fridge,” the second season episode of Netflix’s “The Kominsky Method” that Douglas has submitted for Emmy Awards consideration. After scoring a nomination for the show’s first season last year, the Emmy-winning actor (“Behind the Candelabra,” 2013) returns to the Best Comedy Actor line-up this year to contend for a second trophy.

In “A Libido Sits in the Fridge,” Douglas’ Sandy, a former actor turned acting coach, reconnects with his old flame Lisa (Nancy Travis) and though he wants to rekindle their romance, Lisa suggests they try to be strictly-platonic friends. Sandy weighs this option as he wards off what he thinks are romantic advances from one of his students, and ultimately gives his friendship with Lisa the “old college try” during a movie night at Lisa’s house.

Will Douglas’ charming turn as a reluctant best friend to an ex woo Emmy voters? See the pros and cons of his submission below in our episode analysis.

Douglas is as thoroughly winning in his submission as one would expect from a star of the silver screen. The two-time Academy Award winner––Douglas has one for producing “One Flew Over the Cuckoo’s Nest” (1976) and one for his leading role in “Wall Street” (1988)––charms his way through the episode as he tries to court Lisa at dinner, delivers a voice-over monologue as he distracts himself from his student’s seeming advances, gives relationship advice to his best friend and agent Norman (Emmy nominee Alan Arkin), and navigates a movie night with Lisa without crossing any boundaries. Voters might gravitate to Douglas’ lived-in and endearing performance.

Douglas dominates his episode and is only off-screen for two scenes that focus on Norman. In comparison to those scenes, which are somber as Norman mends fences with his estranged daughter Phoebe (Lisa Edelstein) and his own old flame Madelyn (Jane Seymour), Douglas’s plot is purely comedic. In addition to his sharp delivery of Lorre’s dialogue, Douglas also gets to do some physical comedy. When Lisa surprisingly abandons their platonic-pledge, Sandy races out to his car to retrieve his Cialis, but gets stopped by police who thinks he’s breaking in. Upon his return, he struggles to help Lisa into bed after she drinks far too much red wine, but leaving the following morning, those same police officers give Sandy a round of applause, and Douglas takes a thoroughly unearned but hilarious bow.

SEE Could ‘The Kominsky Method’ season 2 be Chuck Lorre’s ticket to his overdue first Emmy?

The Television Academy has not warmed up much to “The Kominsky Method.” Though the series did break through with a Best Comedy Series nomination this year, its total nominations stayed flat year-over-year at just three bids. The acting branch, in particular, didn’t extend its love for the show beyond nominations for Douglas and Arkin, who were both nominated last year. Neither actor took home the trophy for the first season and with no signs of increased interest from the actors, the show might go home empty-handed, Douglas included.

The Best Comedy Actor category is quite competitive this year. Douglas contends against two TV veterans who are up for their series’ final seasons––Eugene Levy (“Schitt’s Creek”) and Ted Danson (“The Good Place”)––as well as frequent nominees Anthony Anderson (“black-ish”) and Don Cheadle (“Black Monday”). Ramy Youssef (“Ramy”) will also prove formidable, especially since he succeeded Douglas as the winner of the Golden Globe for Best TV Comedy Actor. Youssef’s victory over returning-champ Douglas suggests that Douglas’s momentum has dissipated.