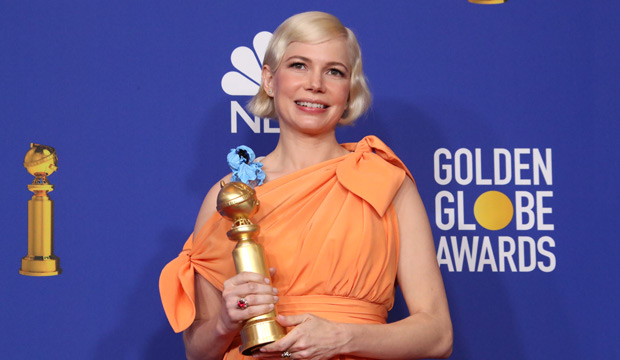 On Sunday night, a whopping 14 actors from film and TV were recognized for their work in the form of Golden Globe Awards. (See the winners list.) But who gave the best acceptance speech? That answer, according to a leading 26% of Gold Derby readers, was Michelle Williams. The “Fosse/Verdon” star won Best Limited Series Actress for her role as actress and dancer Gwen Verdon, but she spent her time at the podium addressing gender inequality and a woman’s right to choose. Do you agree that Williams gave the best acceptance speech at the 2020 Golden Globes? Sound off down in the comments section.

Joaquin Phoenix (“Joker”) came in second place in our poll with 22%, with Brad Pitt (“Once Upon a Time in Hollywood”) in third at 15% and Renee Zellweger (“Judy”) in fourth at 11%. None of the other 10 celebs crossed double-digits. See the full rundown of poll results below.

“When you put this in someone’s hands you’re acknowledging the choices they make as an actor,” Williams said while clutching her golden statuette. “But you’re also acknowledging the choices they make as a person. The education they pursued, the training they sought, the hours they put in. I’m grateful for the acknowledgement of the choices I’ve made and I’m also grateful to have lived in a moment in our society where choice exists, because as women and as girls, things can happen to our bodies that are not our choice.”

She continued on, “I’ve tried my very best to live a life of my own making, and not just a series of events that happened to me. But one that I could stand back and look at and recognize my handwriting all over. Sometimes messy and scrawling, sometimes careful and precise. But one that I had carved with my own hand. And I wouldn’t have been able to do this without employing a woman’s right to choose.”

Williams then urged viewers at home to do their part in ensuring they elect officials who will support gender equality. “So, women 18 to 118, when it is time to vote, please do so in your self-interest. It’s what men have been doing for years, which is why the world looks so much like them, but don’t forget we are the largest voting body in this country. Let’s make it look more like us,” she concluded.

Here are the complete results of our poll that asked 2020 Golden Globes viewers to name who gave the best acceptance speech:

0% — Russell Crowe (“The Loudest Voice”) — Due to the Australian bush fires, he was not able to attend the ceremony.