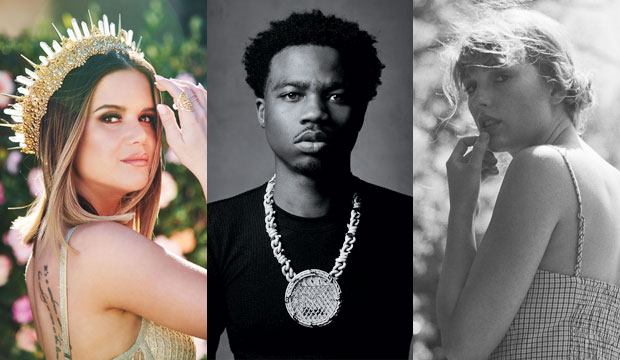 Who will get the most nominations at the 2021 Grammys when they’re announced on November 24? Our forum posters are debating the possibilities. Scroll down to read some of their comments, and vote in our poll at the bottom of this post.

First off, it must be said that having the most nominations doesn’t necessarily mean you’re the front-runner to win top prizes. Last year Lizzo had the most bids but it was Billie Eilish who swept the general field. And the year before Kendrick Lamar topped the nominations tally thanks to the “Black Panther” soundtrack, but he only won once at that event.

In fact, R&B and rap acts have received the most nominations in most years lately, thanks in no small part to how common collaborations are in hip-hop, often giving artists multiple chances at nominations per category. But Grammy voters have been notoriously stingy about honoring hip-hop outside of their genres. Still, topping the heap of nominations usually means you’re good for at least a win or two.

SEE2021 Grammy nominations date finally announced: When will we know the contenders for music’s biggest prize?

This year that’s good news for Roddy Ricch. He won a Grammy last year (Best Rap Performance) as a featured artist on the late Nipsey Hussle‘s “Racks in the Middle,” but this time around he could eclipse that haul. He may be nominated in Album of the Year and Best Rap Album for his debut album “Please Excuse Me for Being Antisocial,” and he’s a strong contender for multiple Record of the Year and rap performance/songwriting bids for two number-one hits, his own “The Box” and “Rockstar” with DaBaby.

There’s also a country artist who could rack up myriad nominations thanks to her collaborative work. Maren Morris is a strong contender for Record and Song of the Year, plus Best Country Solo Performance and Best Country Song for her number-one country hit “The Bones.” And she’s also a member of the supergroup The Highwomen, with whom she could be nominated several more times, including Album of the Year for their self-titled collection.

Then there’s Taylor Swift, who hasn’t collaborated with many other artists this year, but is still a Grammy favorite who could pick up at least a half-dozen noms for her album “Folklore,” her single “Cardigan,” her country song “Betty” and her music video for “The Man.” Perhaps she’ll even match her all-time best haul in 2010 when she was nominated eight times and ended up winning Album of the Year for “Fearless.”

Check out some of our forum posters’ best guesses below, and then vote in our poll at the bottom to let us know who you think will come out on top.

BYEDON2020: “I personally think it would be fun if The Weeknd, Roddy Ricch, and Taylor Swift got six nominations altogether.”

Ace James: “You know, I could see it being Taylor, The Weeknd and Roddy all having the most nominations. It would be around five to eight but it’s possible.”

Ghost: “It’ll probably end up being an urban artist, like Roddy Ricch. They are usually double-nominated in multiple categories.”

Breathe: “A lot of rap artists in the past few years [have led the nominations] like Eminem, Kendrick, Kanye and Jay-Z. I think it will be Roddy Ricch, he will get a lot of noms including for his collab with DaBaby.”