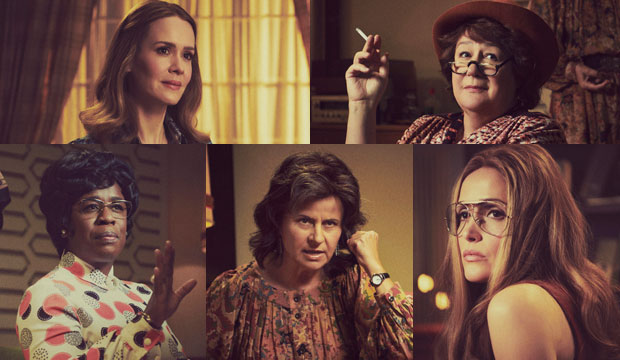 “Mrs. America” tells the story of some of the most influential women in modern US political history. They’re played by an A-list cast led by Cate Blanchett as anti-feminist activist Phyllis Schlafly. Now they could pull off an unprecedented sweep at the Emmys, where as many as five of them could storm the race for Best Movie/Limited Supporting Actress.

SEE‘Mrs. America’ reviews: Cate Blanchett is ‘masterful’ in a limited series that will leave you ‘questing for a revolution’

As of this writing “Mrs. America” holds five of the top 10 slots in our Emmy odds, which are based on the combined predictions of about 2,000 Gold Derby users as of this writing. Rose Byrne ranks third with 7/1 odds for playing Gloria Steinem. Margo Martindale is fourth with 15/2 odds in the role of Bella Abzug. On the bubble are Sarah Paulson as fictional character Alice Macray with 16/1 odds, Tracey Ullman as Betty Friedan with 22/1 odds and Uzo Aduba as Shirley Chisholm with 30/1 odds.

It doesn’t hurt that all of those women have an established track record at the Emmys. Byrne was a two-time nominee for her role in “Damages.” Martindale won her first Emmy for “Justified” and then two more for her recurring role in “The Americans.” Paulson is a frequent nominee who finally won for “The People v. O.J. Simpson.” Aduba took home two Emmys for “Orange is the New Black.” And Ullman is an awards darling with seven wins over the course of her career so far.

There have never been four nominees from the same program in the race for Best Movie/Limited Supporting Actress, but there have been a few occasions when three women broke through. In recent years, “Mildred Pierce” had three nominees in 2011 (Melissa Leo, Mare Winningham and Evan Rachel Wood), “American Horror Story: Coven” had three nominees in 2014 (Angela Bassett, Frances Conroy and winner Kathy Bates) and “American Horror Story: Freak Show” picked up three in 2015 (Bassett, Bates and Paulson).

But will voters have trouble deciding between the supporting actresses of “Mrs. America,” ultimately hurting all their chances? That’s actually not a problem in the nominations phase when voters are allowed to check off as many names as they like in any given category. It’s only during voting for the winners that vote-splitting can be a problem because voters must pick only one actor from the list of nominees.

How many “Mrs. America” actresses do you think will be nominated? Will one of them win?