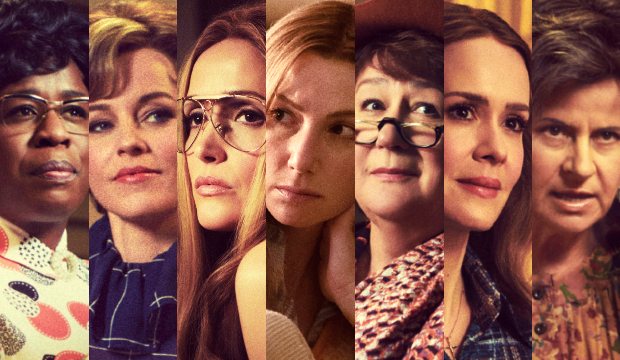 The upcoming FX on Hulu miniseries “Mrs. America” has more strong contenders for Best Movie/Limited Supporting Actress than the category has nomination slots. No single program has ever occupied more than three of the slots simultaneously, but both “The Normal Heart” and “Angels in America” have achieved the feat in the equivalent male category. The 1970s-set “Mrs. America” begins with an episode dedicated to executive producer and lead actress Cate Blanchett‘s eponymous character and closes with an ensemble episode that wraps up various story lines from the season, but the seven middle episodes each spotlight a different supporting actress, justifying the nomination for whomever the TV academy ultimately chooses. The seven actresses in sequential episode order are:

Rose Byrne as Gloria Steinem (April 15: “Gloria”)
The de facto leader of the season-long and decade-spanning campaign to ratify the Equal Rights Amendment, Byrne is playing the most iconic real-life figure and the chief rival to Blanchett’s anti-feminist Phyllis Schlafly. Byrne has the most screen time of any supporting actress on the show, but she is absent from most or all of three of the nine episodes, so “Mrs. America” is still the Blanchett show. Byrne was a 2009 and 2010 Best Drama Supporting Actress nominee for co-leading “Damages.”

Uzo Aduba as Shirley Chisholm (April 15: “Shirley”)
Chisholm was the first black candidate to seek a major party’s nomination for President of the United States, as well as the Democratic Party’s first female candidate. Aduba figures little into other episodes, but is helped by her episode’s placement in the season, as Hulu is releasing the first three episodes together. The episode also stands out for emphasizing the minority experience in a movement that was headlined by white women, with this show following suit. Aduba won Emmys in 2014 and 2015 for “Orange is the New Black” before reaping an additional Best Drama Supporting Actress nomination for the role in 2017.

Tracey Ullman as Betty Friedan (April 22: “Betty”)
Ullman has the loudest character as the proclaimed mother of the women’s movement, so her brashness stands out in other episodes. Her episode climaxes with Friedan losing her temper on stage during a one-on-one debate with Schlafly, but the episode also displays a tender side to Betty by exploring her relationship with her daughter. Friedan appears less as the season progresses and the story gets further from her trailblazing during the decade that preceded the miniseries’ narrative. Ullman has won six Emmys from 24 nominations for acting, producing and writing, most recently in 2018 for Best Variety Sketch Series nominee “Tracey Ullman’s Show.”

Ari Graynor as Brenda Feigen-Fasteau (April 29: “Phyllis & Fred & Brenda & Marc”)
Playing a young lawyer, Graynor also faces off on stage with Blanchett during her episode’s climax, with both Feigen-Fasteau and Schlafly accompanied by their husbands. The episode has a depth unlike most other by taking a more personal approach to its central character as she wrestles with her sexual orientation, which allows for more emotional material than the history lessons of other episodes. The episode also stands out for tackling LGBT themes, with Feigen-Fasteau figuring little into other episodes. Graynor has no prior major nominations.

Elizabeth Banks as Jill Ruckelshaus (May 6: “Jill”)
Working at the White House, Ruckelshaus is the most prominent Republican supporting the women’s movement. She is a viewpoint character for Republicans who do not sympathize with the general portrayal of civil rights as a partisan issue, but Ruckelshaus barely registers outside of her episode, which lacks the dramatic range of others. Banks was nominated for Best Comedy Guest Actress in 2011, 2012 and 2015 for “30 Rock” and “Modern Family.”

Margo Martindale as Bella Abzug (May 13: “Bella”)
Abzug is a consistent presence like Steinem in the narrative. This extends to the finale, which punctuates her arc more than most. Abzug also stands out across the season with her knack for spewing racy one-liners. A three-term congresswoman, Abzug plans the National Women’s Conference in her episode. Martindale won Best Supporting Drama Actress for “Justified” in 2011, then was nominated in Best Drama Guest Actress for “The Americans” in 2013 and 2014 before winning in that capacity in 2015 and 2016.

Sarah Paulson as Alice Macray (May 20: “Houston”)
A close ally of Schlafly, Alice is a housewife who is opposed to the women’s movement that is spearheaded by the six aforementioned viewpoint characters. Alice is the only fictional character who gets the spotlight; hers differs with its linear narrative in the eponymous location that follows a day in the life of Alice exclusively, without cutting to subplots in other parts of the country. Unburdened by the rigidness of history, Alice’s episode is distinguished by its surreal quality, as Alice is accidentally drugged, leading to various tearful exchanges and Alice even having to fend for her life in a dream sequence. Paulson further benefits from a deliberately designed arc — that extends into the finale — with character growth not afforded in the truthful depictions of actual dynamics and events in previous episodes. Paulson’s biggest drawback as a contender is that she comes to prominence so late in the season, after some viewers will have stopped watching and following several episodes in which she makes no impact. Paulson received seven movie/limited acting nominations from 2012 to 2018, winning Best Movie/Limited Actress for “The People v. O.J. Simpson” in 2016.

Who will the academy recognize for Best Movie/Limited Supporting Actress? Make your Emmy predictions so that Hollywood insiders can see how their shows and performers are faring in our odds. You can keep changing your predictions as often as you like until the nominations announcement on July 28. And join in the fun debate over the 72nd Primetime Emmy Awards taking place right now with Hollywood insiders in our television forums.