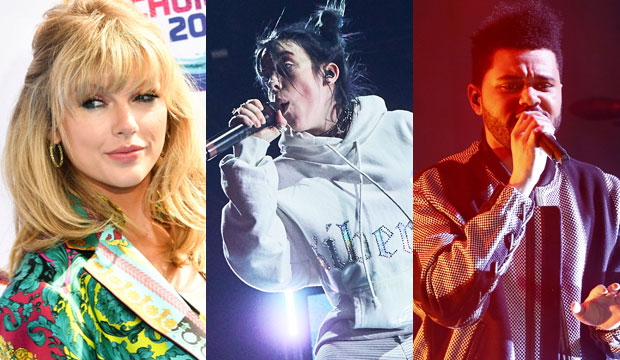 MTV announced the nominees for their 2020 Video Music Awards on July 30 with the ceremony set to take place on August 30. So now that we know who’s in the running for these fan-voted prizes, who’s going to win? You can place your bets in 15 categories here in our predictions center including a couple of new ones created specifically for the COVID-19 pandemic era: Best Music Video from Home and Best Quarantine Performance.

The race for Video of the Year includes a few past champs. Lady Gaga and Ariana Grande are this year’s leading nominees with nine apiece. Most of those bids are for their collaboration, “Rain on Me,” but while Gaga claimed Video of the Year once before (for “Bad Romance” in 2010), Grande is still waiting for a win in the top contest.

But they’re both up against a couple of two-time winners. Eminem prevailed for “The Real Slim Shady” (2000) and “Without Me” (2002), and now he’s up for “Godzilla” with the late Juice WRLD, but he hasn’t won the top prize in 18 years. Taylor Swift‘s double victories were more recent: “Bad Blood” (2015) and “You Need to Calm Down” (2019). If either of them prevails again they’ll be the first ever to win three times, and if Swift wins she’ll be the first to go back-to-back at the VMAs.

“Everything I Wanted” by Billie Eilish is also nominated in the top category; she won three awards last year but not Video of the Year. “Life is Good” by Future featuring Drake contends as well; Drake has won three times in his career, but Future has yet to take home a VMA. And rounding out the category is “Blinding Lights” by The Weeknd, who is also awaiting his first win after 11 previous nominations. But all six nominees have formidable fan bases, so it’s just a question of which artist’s armies are best at getting out the vote.

Be sure to make your MTV Video Music Award predictions so that music executives and top name stars can see how they’re faring in our odds. Don’t be afraid to jump in now since you can keep changing your predictions until winners are announced on August 30. Download our free and easy app for Apple/iPhone devices or Android (Google Play) to compete against legions of other fans for best prediction accuracy scores. And join in the fierce debate over the 2020 VMAs taking place right now with Hollywood insiders in our music forums. Read more Gold Derby entertainment news.