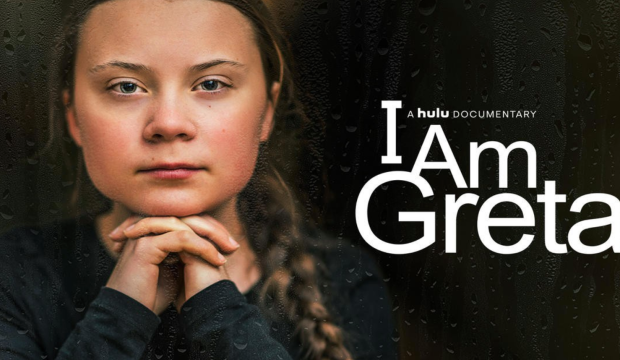 Passionate Swedish teen environmentalist Greta Thunberg has galvanized her peers and adults to become climate change activists. She was nominated for a Nobel Prize. Addressed the U.N. General Assembly proclaiming ‘How dare you?’ You have stolen my dreams and my childhood with your empty words.” Donald Trump slammed her in a tweet telling her she needed to “chill.” Greta, who has Asperger’s Syndrome, was cruelly described by a Fox News commentator as a “mentally ill Swedish child.”

She also recently won the Critics Choice Documentary Award for most compelling living subject of a documentary for “I Am Greta.” The Hulu documentary that premiered at the Venice Film Festival and also played Toronto before it began streaming in November. Film Independent recently invited filmmaker Nathan Grossman to discuss the film.

“I Am Greta” began with a tip in 2018 from a friend who knew Greta’s family “a little bit” that the 15-year-old was sitting outside of the Swedish parliament with a sign that stated, “School Strike for the Climate.” “We’d had a very warm summer in Sweden with lots of forest fires,” said Grossman. “I had a discussion with my boss and was like maybe it’s interesting to do some kind of record to see what kind of person this is, what kind of activism this. I googled Greta Thunberg and there were just a few results. She had done like an op-ed thing with one newspaper.”

So, he set out to the tiny street outside the Parliament where she was sitting by a stone wall with her sign. “I talked to her and said ‘I might be here for a day…. So, don’t get sad if I don’t say. That’s just the way filmmaking works.’ Greta told him it was okay for him to be there “as long as you don’t interfere with my activism.” When people and journalists stopped by to talk with her “I felt she had something and decided to continue following her.”

Initially, he didn’t know how the documentary would play I out. “I think many documentarians recognize themselves that you’re following something, and you don’t have any ideas from the beginning what it is even and then you don’t know where it’s heading,” Grossman explained.

Then protests on climate change popped up in Australia and Belgium. “There were tens of thousands of kids,” he said. “Many of them had signs saying, ‘I stand with you, Greta.’ Then in that moment I think it really struck me that her way of talking about this issue, compressing it down to something that was so emotional and easy to understand. It made an impact on people far from Sweden. I decided to really step it up a notice following her more and travel along. “ He asked to accompany Greta and her father Svante on one of first trips. “I don’t know if you have it in the States, but he is like a home father. It’s the equivalent of an at home mother, but it’s a dad.” (Svante Thunberg, who is an actor, manages her schedules and accompanies her on all her trips.)

While on the first excursion, “he was driving the car and helping her.  I wanted the movie from her point of view because I thought there was so much noise, analysis and ideas around her. But I felt that the father in more verité scenes was such a funny, interesting and emotional person to bounce [off] her feelings, so that became and is a large part of the plot-that relationship.” Her father doesn’t hold anything back about his daughter explaining in the film she suffered from depression and selective mutism when she was traumatized after seeing a film on climate change at school. She didn’t go to school during that time, lost a lot of weight and would only talk to her parents, her younger sisters and her beloved dogs. When she emerged from that depression, Greta turned to climate activism.

Still, her father has to continue to beg her to eat and deal with her incredible stubbornness. “I think many teenagers are stubborn,” said Grossman. “I think anyone who has been a teenager or have teenage children know that weird thing where teenagers, they don’t want you to be there. You’re just an annoying parent. But at the same time, at that age, you still have fun with your parents and need lot of help from them with logistics.” The difference, he said, is Greta is more stubborn than the average teenager “which, of course, I noted filming her and also why I decided this more verité style because I didn’t want to interfere with her activism in asking her to do stuff because just impossible.”

Grossman acknowledged he didn’t have much funding in the beginning save for a small sum from the Swedish public broadcaster. “I decided to shoot this myself as DOP” he said. But it ended up being a positive. “I have a background as a cinematographer and also quickly understood that this is also a way to get into rooms,” noted Grossman. “Things were happening very quickly and on this high political level. I figured if I presented myself as just one person and an independent filmmaker, it might be easier than if I run in with two DOPs, two sound engineers.”