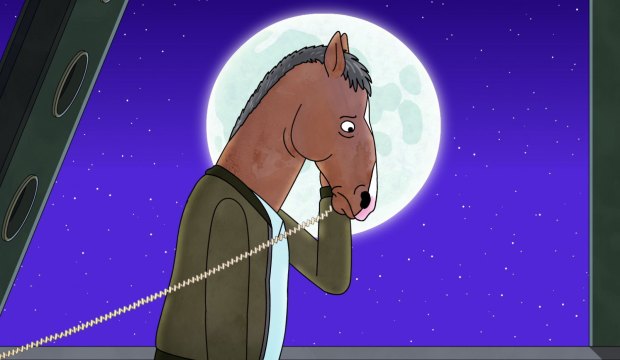 It’s now or never for everyone’s favorite depressed and toxic talking horse on Netflix. While “BoJack Horseman” has been hailed by critics and garnered a loyal fan base, the program is still without an Emmy win. Saturday’s Creative Arts Emmys presentation will be the show’s last chance to secure a victory for Best Animated Program as the series concluded in January. It scored its first nomination in the category last year. While many were predicting it to prevail, the honor ended up going to “The Simpsons.” In order to prevail, the show’s going to have to beat back the challenges from three previous winners and another Netflix show seeking its first win.

SEE2020 Primetime Emmy predictions: Our official odds in all 23 categories for Sunday night

“BoJack Horseman” is nominated for the series’ penultimate episode, “The View From Halfway Down.” BoJack finds himself in a recurring dream of his, at a dinner party where all the guests are people from his past who have died. They include his mother (Wendie Malick), his former best friend (Stanley Tucci), the girl who played his TV daughter (Kristen Schaal), his soldier uncle (Lin-Manuel Miranda), a former co-star (Brandon T. Jackson) and Zach Braff (as himself). As they trade stories about various aspects of their lives, BoJack wonders how he got there since he last remembers going swimming in the pool of his former house. He starts to panic when he doesn’t wake up when he usually does. He then witnesses each attendee perform a talent routine that ends with them disappearing into a black void. BoJack tries to run away from a black liquid that begins to consume everything and he calls Diane (Alison Brie), only to discover that his mind is processing that he went on a suicidal bender that ended with him passed out in his pool after actually trying to call Diane. In his mind he continues to talk with Diane as the blackness eventually begins to consume him. When the blackness finally overpowers BoJack, we hear the sound of a heart monitor flat-lining as the credits role. After several seconds, we then hear regular beeps indicating a heart beat.

Like last year’s submission, the episode-long monologue, “Free Churro,” it’s a knockout episode that’s deeply affecting. Unlike last year’s submission, this episode really takes advantage of the show’s animated format. The constant presence of the black liquid that eventually consumes everything is haunting and unsettling, and could only be accomplished through animation. Another advantage is that the episode easily has the most emotional depth of this year’s nominated programs. On the other hand, the darkness of the episode could turn some voters off, as it doesn’t have as much balance with the show’s comedic aspects. There’s also a chance that episode’s emotional punch is lost on some voters who don’t know the backstory of all these departed characters.

SEEWill ‘BoJack Horseman’ get what it deserves? It has never won an Emmy, and this is its last chance

“Rick and Morty” returns to this race, two years after their victory for “Pickle Rick,” with “The Vat of Acid Episode.” Rick takes Morty to assist in a crystal swap with some alien gangsters. When things go south, Rick and Morty jump into a liquid that’s disguised to look like a vat of acid where they can hide using oxygen tubes until the gangsters leave. When the gangsters end up staying around much longer, Morty gets irritated and tries to kill them. Morty criticizes the acid idea and ends up nudging Rick to create a “save point” remote that allows him to save a place in life and return to it if things go wrong. Morty takes it and engages in a bunch of shenanigans, seemingly without consequence. He meets a girl, falls in love with her and after several months the two embark on a vacation only to have their plane crash. They survive and end up making it back to civilization but Jerry accidentally uses the “save point” remote thinking it’s the TV remote and transports Morty back to just before he met the girl. Morty tells Rick he’s learned his lesson but Rick reveals that the remote hasn’t actually reset anything. Instead, when Morty used the button, he was transported to an alternate dimension and killing the Morty that’s native to that dimension, as well as leaving a bunch of people having to deal with the consequences of what he did. When a bunch of affected people converge on Morty’s house, Rick gives Morty one way of escaping: jumping into a vat of fake acid. The episode is extremely funny, it’s brilliantly animated and even though it’s not quite on the same level as “Pickle Rick,” it still feels like it would be a worthy winner. This could easily upset “BoJack” and take the prize.

After their surprise win last year, “The Simpsons” returns for their 29th nomination in this category. They hope to score their 12th win here with “Thanksgiving of Horror,” the eighth episode of their 31st season. The episode is formatted like their annual “Treehouse of Horror” Halloween episodes only the three vignettes center around the November holiday. The first segment, “A-Gobble-Ypto,” has many Springfield residents depicted as turkeys that are being hunted by Pilgrims (also portrayed by the show’s characters). The second vignette, “The Fourth Thursday After Tomorrow,” sees Homer buying Marge an A.I. (complete with Marge’s memories), to assist her with preparing for the holiday meal, but the A.I. system proves to be better at managing the family than Marge is. The final piece, “The Last Thanksgiving,” sees Bart and Milhouse accidentally bring a jar of cranberry sauce to life which begins to eat almost every child in Springfield. The episode was well-received by fans and critics, but if the Halloween specials were never able to win in this category before, why would a similarly formatted episode be able to do it with a Thanksgiving theme?

SEEAaron Paul didn’t get any acting nominations, but he can still walk away with 2 Emmys

“Big Mouth” is back with their second consecutive nomination and they have chosen as their episode, “Disclosure the Movie: The Musical!” The episode centers on the students doing a musical staging of the 1994 sexual thriller, “Disclosure.” Nick and Missy get cast as the leads and start having feelings for each other, especially after Missy finds her boyfriend, Lars, to be very controlling. Several of the students boycott the production for its twisted message about sexual harassment and the teacher putting on the show starts an inappropriate relationship with one of the students. The episode also sees Coach Steve get a makeover from the “Queer Eye” Fab Five and also sees him attempt to get his job back. The idea of a bunch of middle school children doing a musical version of the movie, “Disclosure,” is insane enough on its own but the material with Nick and Missy, as well as Lola getting taken advantage of by the teacher help to bring the episode to a more grounded level. The Fab Five were also used really well as their scenes are very funny and their presence doesn’t feel forced. The show’s two wins on Thursday night (including Maya Rudolph winning Best Character Voice-Over Performance) could also be a good sign for the Netflix program.

Closing out this category is two-time winner, “Bob’s Burgers,” which is nominated for “Pig Trouble in Little Tina,” the fourth episode of the show’s tenth season. In the hopes of getting invited to go on a hayride with Jimmy Jr., Tina starts making fun of her fetal pig that she has to dissect for science class. While she does get invited, Tina starts having nightmares where she’s haunted by the ghost of the dead pig, which threatens her being able to actually go on the hayride. Elsewhere in the episode, Bob tries to overcome his severe anxiety of having things inserted in his ears when Linda tries to get a big ball of wax out of his ear canal. It’s another really good episode of the show and it demonstrates that the show is still very strong going into its 11th season. However, I actually found myself laughing much more at the Bob/Linda earwax story than the main one that centers on Tina. If other voters feel the same way, they might feel like one of the other nominees is more deserving of the win.