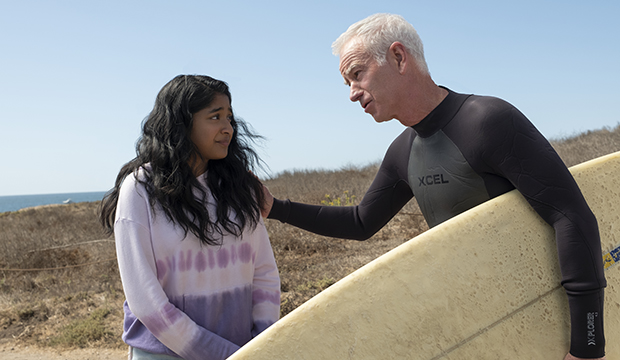 “You cannot be serious!” was the immortal line John McEnroe bellowed to the umpire at the 1981 Wimbledon Championships. It’s also probably what most people thought when they found out the tennis legend was narrating Netflix’s “Never Have I Ever,” Mindy Kaling‘s coming-of-age comedy about a 15-year-old Indian-American girl named Devi Vishwakumar (Maitreyi Ramakrishnan). Never have I ever thought I needed John McEnroe to narrate the life of a boy-crazy teenager, but reader, it works, and the seven-time Grand Slam champ deserves to have “Emmy nominee” added to his list of accomplishments.

McEnroe, who works as a commentator for ESPN and the BBC, is no stranger to pop culture in his post-tennis life. He’s appeared in “Mr. Deeds” (2002), Andy Samberg‘s tennis mockumentary “7 Days in Hell,” “Curb Your Enthusiasm,” and has made numerous visits to “30 Rock,” on which he headlined Kabletown shows “Gold Case,” “America’s Kidz Got Singing” and “Celebrity Homonym.” Those mostly amount to cameos; this is different. The 61-year-old ran into Kaling at a Vanity Fair Oscar party, where she pitched him the show.

“This is Devi Vishwakumar,” McEnroe blares in the pilot, which he has submitted for the Emmys for Best Narrator. “She’s a 15-year-old Indian-American girl from Sherman Oaks, California, and it’s her first day of sophomore year. And I am legendary tennis player John McEnroe.” Beat. “Wow, I look great there,” he deadpans as old match footage plays. “Now, you may be asking yourself: Why is sports icon John McEnroe narrating this tale? It’ll make sense later, I promise.”

After the initial shock and cognitive dissonance wear off, it does make sense, and you start to realize that McEnroe and this show are a perfect match (pun fully intended). McEnroe’s notorious combustible temper on the court is as legendary as his celebrated rivalry with Bjorn Borg, and Devi, like him, is a volatile hothead. Instead of smashing rackets and chewing out umps and line judges, she’s tossing textbooks out her window and telling her mom Nalini (Poorna Jagannathan) that she wishes she were dead instead of her dad Mohan (Sendhil Ramamurthy). McEnroe is her spirit animal. And his fiery, explosive rep is an inspired prism through which to channel teen angst and a time in our lives when we could be very difficult, unruly, and convinced that no one in the world understands us at all.

McEnroe’s casting was also personal for Kaling: Her parents were fans of his, and she grew up watching his matches in the ’80s. On the show, Mohan is a massive Johnny Mac stan. In a dream sequence in the pilot, Devi’s late father sits her down to watch another one of the former world No. 1’s infamous tantrums — his “Answer my question! The question, jerk!” outburst to the umpire at the 1984 Swedish Open — and dispense some advice to his daughter, to whom he compares to McEnroe (“he’s a firecracker, just like you”). “Do you think John McEnroe would let that umpire tell him he’s not beautiful?” Mohan asks. “No, he would stand up for himself.”

McEnroe’s distinctly gruff voice and wry delivery also make this left-field pairing more hilarious than it probably has any right to be. Frequently tasked to use teen lingo, McEnroe, who appears onscreen in the finale, could’ve come off very “How do you do, fellow kids?“, but he utters them with delightful bemusement and a cheeky wink that we all know how ridiculous yet amusing he sounds — the most notable of which is “she would be serving a damn lewk,” also in the pilot.

Netflix renewed “Never Have I Ever” for a second season last Wednesday, so hopefully we’ll be hearing even more of McEnroe whenever that can film. But now is the time to be serious and vote JMac.