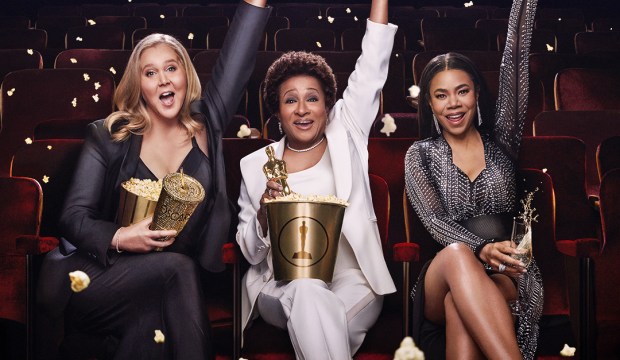 For the second year in a row, there will be no host at ABC’s annual Oscar ceremony. This decision was hardly a surprise considering the ratings for last year’s host-less Academy Awards were up from the past two Jimmy Kimmel-fronted kudos. “I think you’ll see us not messing with that formula to the best of our ability,” ABC Entertainment President Karey Burke stated last year. Do you miss having a host on Oscar night? Vote in our poll below and then tour our photos above to refresh your memory on all of the Oscar hosts through the years.

Kimmel hosted recent ceremonies in 2017 and 2018, aka the years that “Moonlight” and “The Shape of Water” won Best Picture, respectively. His first at-bat ended in one of the biggest Oscar controversies of all time when presenters Warren Beatty and Faye Dunaway erroneously named “La La Land” as the winner instead of “Moonlight.” Producers decided to give Kimmel and Beatty/Dunaway a redo the following year, and everything went off without a hitch.

Prior to Kimmel, Chris Rock emceed the 2016 gala that presented “Spotlight” with the night’s big prize. It was Rock’s second time as host following the 2005 ceremony, when “Million Dollar Baby” prevailed. And Neil Patrick Harris served as ringleader for the 2015 edition when “Birdman” dominated.

SEEIs ‘Parasite’ doomed at 2020 Oscars due to stingy voters?

The last woman to host was Ellen DeGeneres, who returned in 2014 (the “12 Years a Slave” ceremony) after first popping up in 2007 (the year of “The Departed”). How could anyone forget DeGeneres’ infamous Oscar selfie that included the likes of Jared Leto, Jennifer Lawrence, Channing Tatum, Meryl Streep and Julia Roberts?

In lieu of a host last year, “Saturday Night Live” alums Maya Rudolph, Tina Fey and Amy Poehler opened the ceremony at the Dolby Theatre. The funny ladies mentioned several times how they weren’t the hosts, but joked they were “gonna stand here a little too long so that the people who get ‘USA Today’ tomorrow will think that we hosted.”