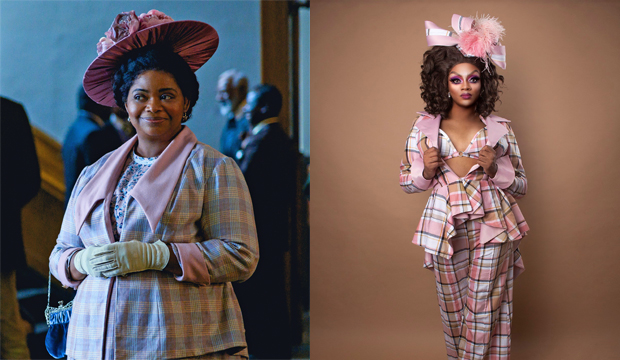 Spencer reacted to Heidi N Closet‘s recreation of Madam C.J. Walker from “Self Made” (see above) by posting the transformation on her own Instagram with the caption: “Loving @heidincloset as #MadamCJ you?! With all the negativity swirling around, we’re sending smiles and resolve to #Vote!” As the Season 12 Miss Congeniality, Heidi knows something or two about winning, but now an Oscar winner has taken notice of her art and is loving it. On her decision to portray Octavia, Heidi said, “I’ve been a huge fan of Octavia Spencer since seeing her in ‘The Help.’ Plus, many fans point out we look similar … I think it’s the eyes.”

As of this writing, Newton had yet to react to Season 12 winner Jaida Essence Hall‘s recreation of her “Westworld” character Maeve Millay, but did tweet support of the show’s Emmy nomination with an FYC picture featuring her own guest judging stint and the words, “Hook us up bitches!! Best show EVAH!!!” Jaida had this to say about her decision: “I chose Thandie Newton not just because she thought I was beautiful, but because she is as well. She has such range when performing in any film or show and she makes you feel with your heart because she breathes life into every character. I aspire to one day embody all that she’s done with her career. She is such a huge inspiration to me!”

Jaida also posted a recreation of Cox’s Sophia Berset from “Orange Is the New Black” and fellow contestant Widow Von’ Du took on the roles of Angela Abar by King in “Watchmen” and Dr. Rainbow Johnson by Ross in “Black-ish.” Check out our sister site Variety’s photo gallery to see all five of the looks.

“RuPaul’s Drag Race” is nominated for 11 Emmys this year across its franchise, including a chance for host RuPaul Charles to set a new record with a fifth straight win as Best Reality Host, of which he leads our odds as the frontrunner. The series is also expected to three-peat in the reality competition program field despite its controversial season, which would make it the third most rewarded series in the category after “The Amazing Race” (10 wins) and “The Voice” (four).