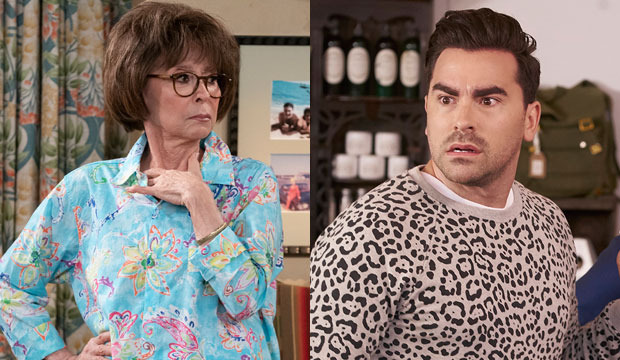 Pop TV had a huge Emmys breakthrough thanks to “Schitt’s Creek,” which is nominated 15 times this year including Best Comedy Series. So it was ironic on Wednesday night, September 16, when Cheryl Campsmith (“One Day at a Time”) claimed Best Multi-Camera Picture Editing for a Comedy Series at the Creative Arts Awards; since “Schitt” hasn’t won any of its nominations yet, that makes “One Day” the first Pop TV series to win an Emmy.

“One Day” actually aired on Netflix for its first three seasons before being cancelled by the streaming service. After an outcry from fans of the show, Pop TV picked it up for a fourth season, which aired six episodes this past spring, plus one animated installment. That was all the show was able to produce before the COVID-19 pandemic shut down productions across the TV industry, but it was enough. The episode “Boundaries,” in which Alex (Marcel Ruiz) walks in on her mom Penelope (Justina Machado) in a moment of, shall we say, self-love, won for its editing.

The series was already an Emmy-winner by the time it arrived at Pop TV, though. Despite being criminally overlooked thus far for its acting, writing, directing and for Best Comedy Series, the show has been nominated every single year for its picture editing, also winning in 2019 for the episode “The Funeral.” But alas, this was the only Emmy nomination for “One Day,” so it appears likely that “Schitt’s Creek” will still eclipse its awards total when all is said and done, if our odds turn out to be correct that is. But “One Day” stands alone on Pop TV for at least one day.