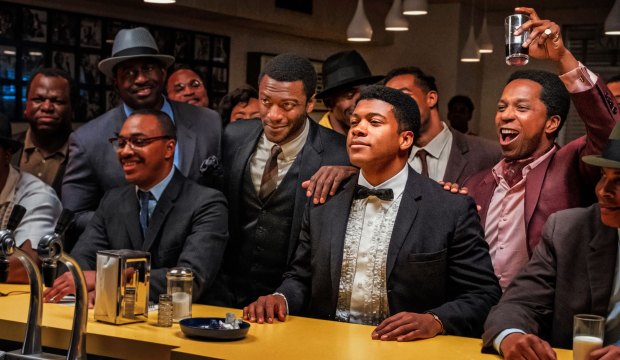 Regina King‘s big-screen directorial debut, “One Night in Miami,” collected glowing reviews when it premiered at the pandemic-downsized Venice Film Festival over the Labor Day weekend. King made history as the first African-American female director invited to show a film at Venice. The raves and Oscar buzz are icing on the cake.

The Amazon Studios fall release imagines what would have happened if boxer Muhammad Ali (Eli Goree) — then known as Cassius Clay — football player Jim Brown (Aldis Hodge), singer Sam Cooke (Leslie Odom Jr.) and civil rights activist Malcolm X (Kingsley Ben Adir) came together after Clay defeated Sonny Liston in February of 1964. What transpires between the legends is a lively and quite timely discussion of the civil rights movement at the time.  Kemp Powers adapted his 2013 stage play of the same name.

SEERegina King (‘Watchmen’): ‘I’m honored to be part of storytelling that is unique and relevant’ [WATCH]

In his review for The Wrap, Alfonso Duralde writes, “For a first-timer to tackle a period piece featuring four cultural legends would be impressive enough, more so when said period piece is based on a four-guys-in-a room play that the screen adaptation livens up with musical performance, boxing sequences and massive crowd scenes. King doesn’t just take on these challenges; she succeeds at turning a property with a number of potential wrong turns into a vibrant historical tale tackling issues and controversies that remain tragically relevant nearly 60 years later.”

Savina Petkova of AwardsWatch had this to say: “King’s command of emotions is owed only partly to the quartet of excellent performances that bounce off each other even in moments of heartfelt disagreement regarding the status of Black men’s labour in relation with the white-sponsored economy, or the tensions around Malcolm’s retreat from the Nation of Islam and issues of racial separatism. The film is strung out of sequences brimming with intense and pure emotion that imbues both the words and their bearers with the light of the much-needed social change that, indeed, is taking too long even now to be complete.”

Kate Erbland of Indiewire also lavished praise upon the first-time film director as well as playwright turned screenwriter Kemp Powers, declaring their efforts to be a “reflective film,” adding that the movie “hits so hard because it remains joyfully, often painfully grounded in what makes a person extraordinary, even when the world isn’t ready for them. Here’s hoping this world is ready for what King has to show it.”

As an actress, King has been a regular awards magnet in the past decade. She won two Emmys as a supporting actress for her work in “American Crime” and one for her lead role in “Seven Seconds.” King added an Oscar to her collection after winning a supporting trophy for 2018’s “If Beale Street Could Talk.” And she may claim a fourth acting Emmy for her work as a lead in HBO’s limited series “Watchmen,” according to Gold Derby’s combined prediction odds.