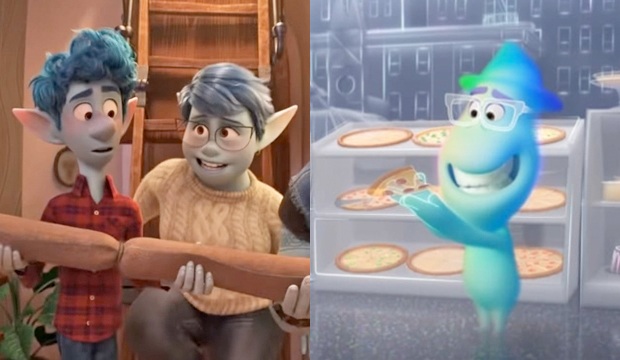 Since “Toy Story” (1995), Pixar has set the standard for animated feature films. The studio’s award success has been unmatched as it has produced a startling amount of critically acclaimed and box office successful flicks. And this year, Pixar’s biggest awards competition could be against itself. Because both the spring released fantasy adventure “Onward” and the upcoming musical comedy “Soul” will both be eligible for consideration.

Pixar has been Oscar’s favorite studio since the introduction of the Best Animated Feature category in 2001, with 13 nominations in the category and 10 wins. In second place is Disney with 11 nominations and only three wins. In that time, Pixar has produced 18 films. Only five have failed to be nominated. The Golden Globes introduced an animated feature category in 2006. Of those 15 years, the studio has won eight times. At the Annie Awards, nine Pixar flicks have won Best Picture, the most of any studio.

SEE‘Soul’ reviews: Pixar’s first feature with a black lead is ‘visually glorious’ and ‘contemplates the root of all human experience’

It is notable that this year will mark only the third time Pixar has had to compete against itself for awards consideration. The first time was in 2015 when “Inside Out” and “The Good Dinosaur” were eligible. The second was in 2017 when “Coco” and “Cars 3” were both in the running. In both of those years Pixar was able to take out the Oscar, Globe and Annie for “Inside Out” and “Coco.”

In both of those previous occasions, there was a clear front-runner from the studio. “Inside Out” scored an impressive 98 on Rotten Tomatoes (one of the best reviewed films of the year) and raked in more than $850 million at the box office. Compare that to “The Good Dinosaur” which had a mixed 76% Tomatoes score and made an underwhelming $330 million. “Coco” scored 97% and also broke $800 million. Compare that to “Cars 3” 70% and $384 million. Both times only one of these Pixar films even got nominated at the Oscars and both went on to win.

This year “Onward” was well received with an 88% score on Rotten Tomatoes (box office is unfair to judge in a year when it was rushed to streaming in response to cinema closures). It combines humor and heart in an original world from the studio. It is worth noting that it has been non-“Toy Story” sequels where Pixar has had the most trouble getting Oscar recognition. “Soul” is yet to be released or reviewed, but it’s high concept premise and having Pete Doctor (“Inside Out” and “Up”) direct it has the film in the de facto front-runner position.

If both films get nominated at the Oscars, we will see Pixar compete against itself for the first time at these awards. But, it would not be the first time a studio scored multiple nominees in the category. In 2002, Disney had “Lilo & Stitch” compete against “Treasure Planet.” In 2004, Dreamworks had “Shark Tale” take on “Shrek 2.” In 2011, Dreamworks saw “Kung Fu Panda 2” alongside “Puss in Boots.” And in 2016, Disney had “Zootopia” and “Moana” nominated. “Zootopia” is the only one of these films that went on to win.

At the moment, both “Onward” and “Soul” look on track to be award players that might be able to build on the awards history of an iconic studio.