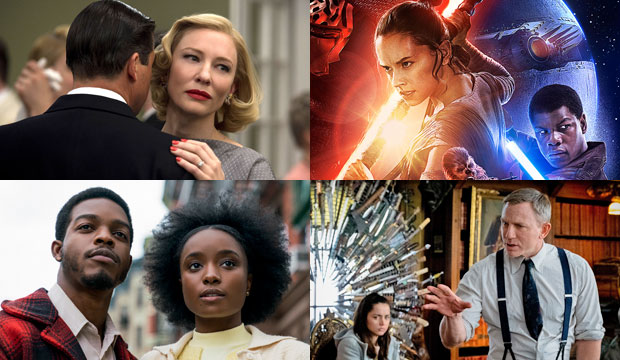 On June 12 the motion picture academy announced changes to the Oscars, including a return to a guaranteed 10 nominees for Best Picture. In recent years the academy has had a sliding scale between 5 and 10 nominees depending on how the voting shook out. In each of those years there were either eight or nine contenders, which means that one or two more films would’ve been included if there had been a full 10 slots. Which films do you think would have benefited from more room in the top category?

For decades the academy only nominated five films for Best Picture, but outcry over the snubs of the 2008 films “The Dark Knight” and “WALL-E” prompted the academy to expand to 10. But that was only in effect for the eligibility years 2009 and 2010, after which the academy implemented the sliding scale, which has been in place for the last nine years. So who came closest in those contests?

There were nine nominees, so what film might’ve taken the 10th slot if one had been available? David Fincher‘s “The Girl with the Dragon Tattoo” is a strong possibility since it earned five nominations including Best Actress (Rooney Mara) and was a surprise winner for Best Film Editing. “Bridesmaids” and “Tinker Tailor Soldier Spy” were also possibilities given their acting and writing nominations. Ditto Best Foreign Language Film winner “A Separation,” which also broke into the writing contest.

“The Master” earned three acting nominations, so it might have come in 10th place that year, though it wasn’t nominated for its screenplay and the writers branch usually loves Paul Thomas Anderson. Other possibilities include writing and acting nominee “Flight” (also a big box office hit), “Moonrise Kingdom” with its lone writing nomination, and “Skyfall,” which earned five bids and won twice for its sound editing and songwriting.

Eight out of the nine Best Picture nominees also earned screenplay nominations (four original, four adapted), so perhaps the unlucky 10th place film was one of the remaining writing contenders: “Blue Jasmine,” which also won Best Actress (Cate Blanchett) or “Before Midnight,” which had no other nominations. Best Animated Feature winner “Frozen” might also have been a big enough hit to sneak into the top 10.

The first year with only eight nominees for Best Picture, which means two extra films would have rounded out the top 10. “Foxcatcher” would have almost definitely gotten one of those slots since it earned five nominations including Best Director (Bennett Miller), which made it the first film since the expansion to be nominated for directing without Best Picture. The 10th spot is harder to guess since there weren’t many other films that received widespread support outside of Best Picture. “Wild” got a couple of acting noms. “Mr. Turner” and “Interstellar” were each nominated for a handful below the line. “Inherent Vice” and “Nightcrawler” made the cut for their scripts.

Another year with only eight nominees. And there were several other films that seemed to be knocking on the door. “Carol” earned six nominations including for its acting and writing, which made it the most nominated film without a Best Picture nomination since the expansion. The controversial “The Danish Girl” picked up a couple of acting bids too (including a win for Alicia Vikander) plus a couple more below the line. The animated film “Inside Out” made the cut for its writing, as did “Straight Outta Compton” and “Ex Machina.” Oh, and a little movie called “Star Wars: The Force Awakens” broke box office records, got great reviews and earned five craft nominations.

It’s hard to say what 10th place might have been since there weren’t many other films with a lot of nominations support that year. “20th Century Women” and “The Lobster” snuck into Best Original Screenplay, but nowhere else. “Jackie” earned three nominations including Best Actress (Natalie Portman), but had under-performed all that season. “Loving,” “Elle,” “Captain Fantastic” and “Nocturnal Animals” had a lone acting nomination apiece. Perhaps one of the animation contenders might’ve gotten it: winner “Zootopia” or nominees “Moana” or “Kubo and the Two Strings.”

I’d put money on “I, Tonya” being the 10th movie left out considering its Best Picture nomination at the Producers Guild Awards and its Oscar win for supporting actress Allison Janney. But it might also have been “Mudbound,” which earned nominations for acting, writing, cinematography and songwriting; that film was a big breakthrough for Netflix, which would rack up multiple Best Picture nominations over the next two years. And there might’ve been an outside chance for technical favorites “Baby Driver” and “Blade Runner 2049.”

There are three films that probably would’ve been jockeying for slots 9 and 10 in this race. “Can You Ever Forgive Me?” and “If Beale Street Could Talk” were both nominated for acting and writing, with “Beale Street” winning Best Supporting Actress for Regina King. And the Polish film “Cold War” was a surprise nominee for Best Director (Pawel Pawlikowski). Besides those, “The Ballad of Buster Scruggs” did better than expected with its three nominations including for its writing; you can never count out the Coen brothers. And maybe “First Man” with its four nominations below the line (including a win for its visual effects), but that film significantly under-performed relative to its early expectations.