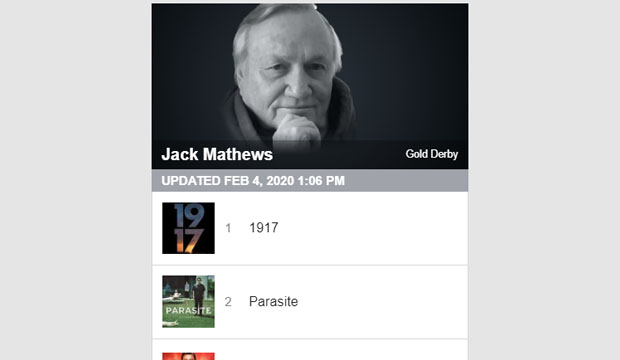 Veteran Oscar seer Jack Mathews concedes that most other pundits believe that the Best Picture race is between “1917” and “Parasite,” but “I love ‘Once Upon a Time in Hollywood’ and I still think it has a chance to win,” he asserts in our podcast chat. Listen below.

“I just watched ‘1917’ again and it’s such an Oscar movie!” Jack adds. “It’s big and it’s complicated. It’s got the most Oscar values to it. Because ‘Parasite’ is going to win the international film award, I think it’s a stretch to think it will win Best Picture for the obvious reason of what happened to ‘Roma’ last year. People think, ‘OK, I’ve got it over here .…’ I think it’s human nature to do that. So I think ‘1917’ is in the front seat, but I wouldn’t rule out ‘Once Upon a Time in Hollywood.'”

See all of Jack’s latest predictions here. Compare how his picks differ from other experts at Gold Derby.

Do you disagree with the Experts’ calls? Make your predictions and see if you can beat the pros and more than 7,000 other Oscar fans making their picks at Gold Derby. Here’s your big chance to prove that you are the best prognosticator in the entertainment biz.

BELOW: Listen to the audio podcast of our chat. Or listen at iTunes, Spotify, Libsyn, Google Play or Stitcher where you can subscribe to our channel.