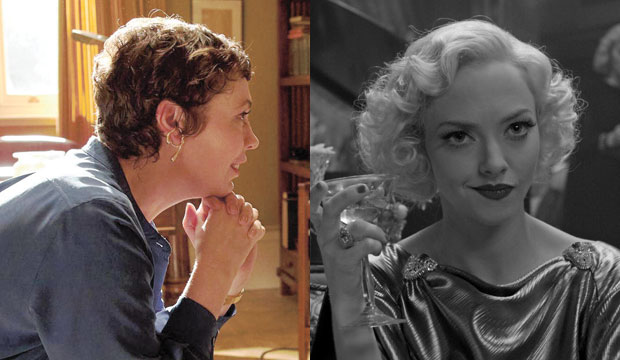 Best Supporting Actress looks pretty open at the 2021 Oscars, and it has undergone a major shift in recent weeks. A battle is underway between Amanda Seyfried (“Mank”) and Olivia Colman (“The Father”) in our Experts’ predictions as of this writing.

SEE‘Mank’ : Who are the true life people in David Fincher’s Netflix film about ‘Citizen Kane’?

A few weeks ago it looked like Glenn Close would finally win her first Oscar for her transformative role as a flinty grandma in “Hillbilly Elegy,” but mixed reviews for that film have called that into question (though several of our Experts are still backing her for the win). Since she isn’t as safe a bet as she was before, the door opened for other challengers.

Seyfried has a few things going for her. She gets to play a real character, and Oscar voters love biographical performances. She plays a rel-life celebrity on top of that: actress Marion Davies. That’s reminiscent of when Cate Blanchett won this category for playing Katharine Hepburn in “The Aviator.” The Oscars are handed out by industry peers who especially appreciate seeing one of their own depicted on-screen.

SEEThese dementia-themed films might get their due at 2021 Oscars, including ‘The Father’ and ‘Dick Johnson is Dead’

However, Colman has an emotionally expressive role in “The Father” as a daughter struggling to care for her deteriorating dad (Anthony Hopkins). She might be disadvantaged by having just won an Oscar two years ago for “The Favourite”; voters may not feel much urgency to award her again so soon. On the other hand, a recent win isn’t always a deal-breaker.

Mahershala Ali won Best Supporting Actor twice in three years (2016’s “Moonlight,” 2018’s “Green Book”). Christoph Waltz won that category twice in four years (2009’s “Inglourious Basterds,” 2012’s “Django Unchained”). And Daniel Day-Lewis won his second and third Best Actor Oscars within five years (2007’s “There Will Be Blood,” 2012’s “Lincoln”). So instead of voters feeling the need to spread the wealth, perhaps Colman is in a honeymoon period where everything she touches turns to gold.