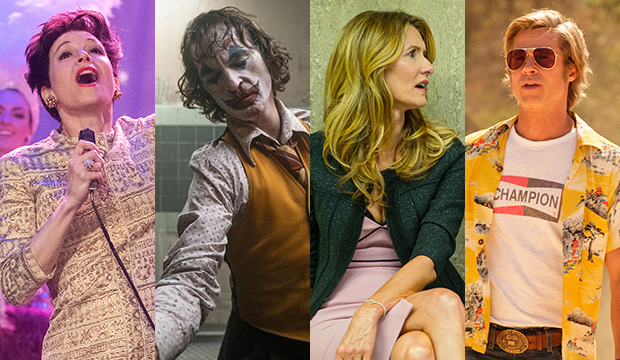 After three consecutive Sundays of awards — the Globes, Critics’ Choice and SAG Awards — Zellweger, Phoenix, Dern and Pitt are three-fifths through their potential sweep, with only the BAFTAs and Oscars remaining, and there is no reason to think any one of them would be upset at either. All four are predicted to win their respective categories at both ceremonies.

Since the BAFTAs became an Oscar precursor 19 years ago, no quartet of Oscar winners had gone 20/20 until McDormand, Oldman, Janney and Rockwell. Though there have been many years with one or multiple individual sweepers, at least one person was derailed, whether by a snub, an upset or eligibility issues. The class of 2014 — Eddie Redmayne (“The Theory of Everything”), Julianne Moore (“Still Alice”), J.K. Simmons (“Whiplash”) and Patricia Arquette (“Boyhood”) — had previously come the closest, winning 19 of the 20, with Redmayne getting edged out by Michael Keaton (“Birdman”) at Critics’ Choice.

There have been two instances of 18 out of 20. Ten years ago, lead acting Oscar champs Jeff Bridges (“Crazy Heart”) and Sandra Bullock (“The Blind Side”) missed at BAFTA — Bridges lost to the Brits’ own Colin Firth (“A Single Man”) and Bullock was ineligible because her film hadn’t opened in the U.K. yet. The following year, BAFTA spoiled the sweep in the supporting categories. “The King’s Speech” stars Geoffrey Rush and Helena Bonham Carter snagged BAFTAs, while Oscar anointed season-long favorites and “The Fighter” co-stars Christian Bale and Melissa Leo, the latter of whom wasn’t nominated at BAFTA.

Last year, we got 15 out of 20, with Mahershala Ali (“Green Book”) as the lone sweeper. Rami Malek (“Bohemian Rhapsody”) lost Critics’ Choice to Bale (“Vice”); Regina King (“If Beale Street Could Talk”) infamously wasn’t nominated at SAG and BAFTA; and Olivia Colman (“The Favourite”) didn’t win SAG and Critics’ Choice, which awarded Glenn Close (“The Wife”) and Lady Gaga (“A Star Is Born”) in a tie.

There is no King-esque craziness or tight Colman vs. Close battle this time around. Everything is seemingly breaking the way of Zellweger, Phoenix, Dern and Pitt. All four had been favorites since the start of the season late last summer, some sight unseen, and they’ve been on cruise control since, with Dern and Pitt topping critics awards. Zellweger and Phoenix weren’t expected to be the critical darlings, but the Globes affirmed their (and Dern’s and Pitt’s) frontrunner statuses as the first big awards show out of the gate earlier this month.

The quartet is also benefiting from the truncated season. There simply isn’t time for anyone else to emerge or assert themselves as a strong alternative, so rubber-stamping becomes more of a default. Hell, the Globe comedy/musical lead champs Taron Egerton (“Rocketman”) and Awkwafina (“The Farewell”) weren’t even Oscar-nominated, the first time that’s happened since Colin Farrell (“In Bruges”) and Sally Hawkins (“Happy-Go-Lucky”) were snubbed 11 years ago — and only Hawkins was a legit Oscar contender in that case. And unlike last year, when there was clearly a lot of love for Colman’s performance from all circles, enough to topple Close’s overdue narrative, there doesn’t appear to be the same kind of passion for any of the other nominees.

It’s not over ’til you-know-what, but it’s sure looking like we’ll have our second sweep ever.