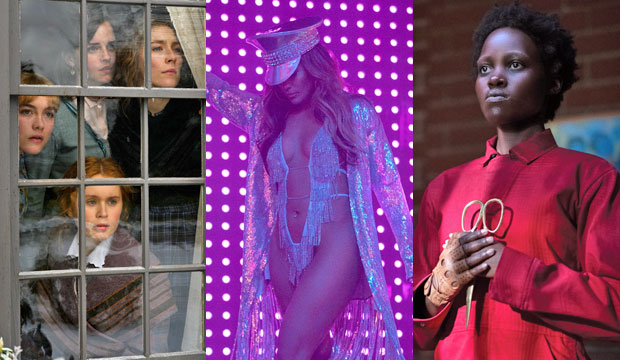 “Parasite” is the Oscars success story of the year, winning Best Picture in a first for a non-English-language film and also becoming one of the highest-grossing foreign films of all time at the domestic box office (and it’ll gross even more after its Oscars windfall). But it’s not the only success story of the season. Here are other films whose accomplishments should be celebrated even though they didn’t get the top Oscar.

No, Greta Gerwig wasn’t nominated for Best Director, and she didn’t win Best Adapted Screenplay, but here’s what she did do: she turned a well-worn, much-adapted literary classic about young women in the 19th century into one of the most critically acclaimed films of the year and a major box office hit. The weekend it lost Best Picture, it crossed the $100 million mark domestically, and as of this writing it has made more than $177 million worldwide. That’s more than twice as much as Gerwig’s previous film “Lady Bird” made, and it’s encouraging for female filmmakers and female stories even if Gerwig doesn’t have an Oscar to show for it (yet).

It didn’t get any Oscar nominations — even for Jennifer Lopez, who seemed like a safe bet after her SAG Award, Golden Globe and Critics’ Choice Award nominations. It was disappointing that the motion picture academy didn’t seem to take it seriously when it was better reviewed than some of their Best Picture nominees. But as with “Little Women,” that shouldn’t take away from the fact that an independent film written and directed by a woman (Lorene Scafaria) and led by women of color grossed more than $100 million domestically. Success sells, so hopefully this will open doors.

It under-performed on Oscar night by losing both Best Picture and Best Director to “Parasite,” but with three Oscars it was still the second most awarded movie of the night, and it was a big fat box office hit with $287 million grossed globally thus far. Granted, it’s not unusual for war movies to be hits — “American Sniper” and “Dunkirk” grossed half a billion dollars each in recent years — but in this day and age it’s still an impressive feat to make money for an original movie with a risky conceit (made to look like a single continuous shot), led by relatively unknown stars, and that isn’t part of a franchise with a built-in fan base. I hope studios keep taking big swings like this one.

How do you follow a billion-dollar “Star Wars” movie? If you’re Rian Johnson, you make an Agatha Christie-style whodunit with themes about inequality that were not so different from “Parasite.” Johnson’s “The Last Jedi” angered some fans on the internet. But “Knives Out” managed to open just three weeks before “Star Wars: The Rise of Skywalker” and still made $300 million worldwide with an original story, while getting Johnson his first Oscar nomination for Best Original Screenplay. There’s even a sequel in the works: “Knives Out: The Last PI,” perhaps?

SEEOscars 2020 winners: Best prediction scores by our Editors and Users

Horror movies are typically good investments (they tend to make lots of money on relatively low budgets), but Jordan Peele‘s film had higher expectations given the critical, cultural and box office impact of his previous film, “Get Out.” However, “Us” earned just as much money as “Get Out” did (more than $250 million globally), achieved similar critical acclaim, and though it didn’t end up at the Oscars like “Get Out,” the fact that it came as close as it did (Lupita Nyong’o earned a SAG Award nomination and numerous critical plaudits) is pretty encouraging for a doppelganger horror movie from March led by a Black actress.

“Once Upon a Time in Hollywood” and “Ford v Ferrari”

File under: they don’t make ’em like they used to. These throwback movies were both set in the 1960s, both won two Oscars, and both hearkened back to bygone eras of moviemaking in different ways. It’s not unusual for the Oscars to respond to that (see also: “The Artist”), but critics and audiences did too. When sound editor Donald Sylvester accepted his Oscar for “Ferrari,” he lamented the film as possibly the last 20th Century Fox movie, a reference to the studio being bought out by Disney and reminding us about the increasing corporate consolidation that could flatten cinematic creativity. Marvel movies are all well and good (well, some of them are, anyway), but hopefully the above seven movies keep hope alive for a wider variety of stories and storytellers at the multiplexes.