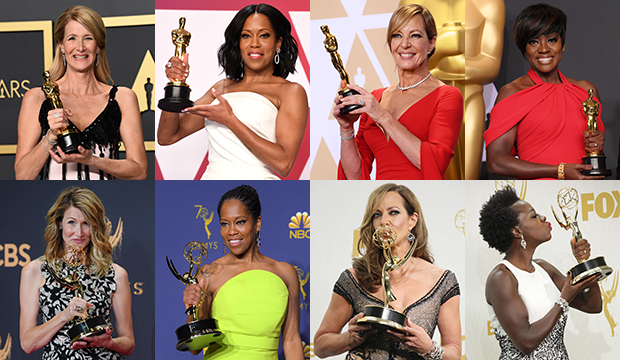 Laura Dern not only closed out the 2010s as the decade’s final Best Supporting Actress Oscar winner, for “Marriage Story,” but she continued a trend in the category: She’s the fourth consecutive champ who had also recently won an Emmy.

The star took home the Best Limited Series/TV Movie Supporting Actress Emmy in 2017 for “Big Little Lies,” one of the show’s eight victories that year. Who did she beat to win that? Her Oscar category predecessor Regina King (2018’s “If Beale Street Could Talk”), who was up for “American Crime” for the third straight year. Don’t feel too bad for King, though, since she had already nabbed two consecutive Emmys in that category for the belated ABC anthology series. King then returned the favor in September 2018 — five months before her Oscar win — beating Dern (“The Tale”) for the lead limited series/TV actress Emmy with “Seven Seconds.”

Janney’s Oscar triumph made it back-to-back wins in supporting actress for stars of “The Help,” as Viola Davis preceded her with 2016’s “Fences” (their “Help” co-star Emma Stone also won the same night Davis did for “La La Land”). Davis made Emmy history in 2015, becoming the first black winner in Best Drama Actress when she prevailed for “How to Get Away with Murder,” and then gave another one of her trademark powerful speeches. “The only thing that separates women of color from anyone else is opportunity,” she declared.

These four are not the only Emmy winners-turned-Oscar winners in the category of the 2010s though. Patricia Arquette had a bit more distance between her wins, upsetting to grab the drama actress Emmy in 2005 for “Medium” before winning her Oscar nearly a decade later for “Boyhood” (2014) in a full sweep. She just added a second Emmy in September for her supporting turn on Hulu’s limited series “The Act.”

And Anne Hathaway collected an Emmy for her voiceover work as Princess Penelope on “The Simpsons” in 2010 before claiming the Oscar for “Les Miserables” (2012). There’s also the decade’s first winner, Melissa Leo (2010’s “The Fighter”), who did the reverse, adding an Emmy for her guest spot on “Louie” in 2013.

This means there are only three supporting actress Oscar winners of the decade who aren’t at least halfway to an EGOT (Davis also has two Tonys): Octavia Spencer (2011’s “The Help”), Lupita Nyong’o (2013’s “12 Years a Slave”) and Alicia Vikander (2015’s “The Danish Girl”). No pressure, guys! But with more shows and more streaming services and more (better?) roles for women than ever on TV, don’t be surprised if they add one soon. Spencer has a long TV resume already, including a recurring role on “Mom,” and just headlined Apple TV+’s “Truth Be Told.”

Maybe the better question is: Which recent Emmy-winning actress will win an Oscar next?