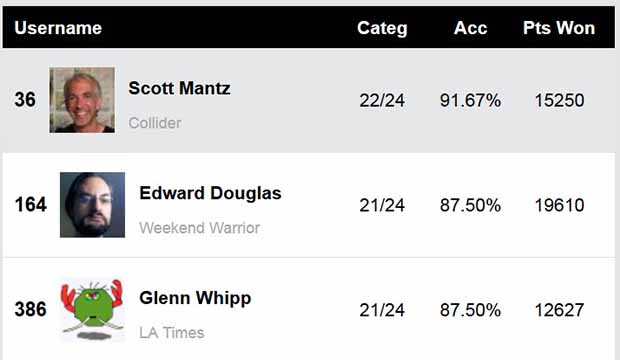 Congratulations to our Expert Scott Mantz (Collider) for an outstanding score of 91.67% when predicting the Academy Awards winners on Sunday. He got 22 of the 24 categories correct and is best among 36 Experts, journalists who cover film and entertainment throughout the year. See Experts’ scores.

Over 10,200 people worldwide predicted these 2020 Oscars champs in all 24 categories in Hollywood. Mantz only missed twice: for Best Director (choosing Sam Mendes) and Sound Editing (missing “1917”). He got the rest correct, including the hard-to-predict Best Picture winner of “Parasite” and the four acting victories of Renee Zellweger, Joaquin Phoenix, Laura Dern and Brad Pitt.