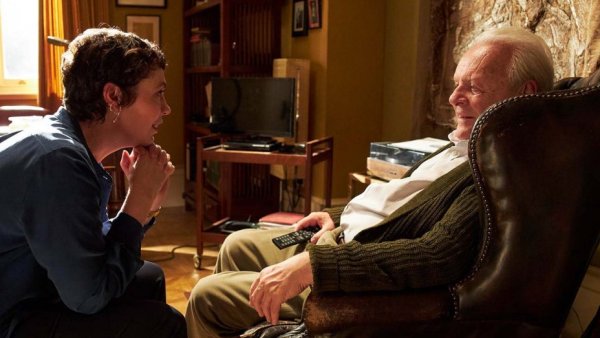 Who might join the two-timer club at the 93rd Academy Awards? While the ongoing coronavirus pandemic has made theater screenings a dicey proposition for the time being, there is been a revival of drive-ins, a surge of VOD titles and streaming sites taking up the slack. Presuming that the five ladies below qualify as leads, here are the actresses who could claim a second Best Actress trophy on April 25.

Olivia Colman, (“The Father”): This Brit won her first Oscar for her role as the amusingly addled 18th-century ruler Queen Anne in 2018’s royal farce “The Favourite.” Her latest film co-stars Anthony Hopkins as her elderly father moves in with his daughter as he struggles with dementia. (see photo above)

Marion Cotillard, (“Annette”): Paris-born Cotillard won her statuette for her rendition of French chanteuse Edith Piath in 2007’s “La Vie en Rose,” becoming the only actor to win for a French-language performance. Her current role is an all-singing one as a famous soprano opposite Adam Driver as her stand-up comic husband. Their lives are changed when their baby daughter exhibits a unique gift. Update: Amazon has moved the film to 2021.

Sophia Loren, (“The Life Ahead”): This Italian beauty won her first Oscar for 1960’s “Two Women,” as a mother protecting her daughter from the horrors of war. She became the first actor to win for a foreign-language performance. At 85, she is starring an update of 1977’s “Madame Rosa,” that year’s foreign-language winner. She plays a Holocaust survivor, a child-care worker and mother of a 35-year-old transgender daughter, who takes in a 12-year-old Senegalese street kid and a 10-year-old Romanian urchin. If Loren does triumph, she will beat the record held by Helen Hayes (1932’s “The Sin of Madelon Claudet,”1971’s “Airport”) for the longest gap between a first and second Oscar win.

Jennifer Lawrence (“Red, White and Water”): The actress who previously won an Oscar as a depressed young widow for 2012’s “Silver Linings Playbook” plays a U.S. soldier who suffers a traumatic brain injury in Afghanistan and struggles to recover back home.

Kate Winslet (“Ammonite”): The British actress who has seven Oscar nominations under her belt and won an Academy Award for her role as an illiterate Nazi concentration camp guard who has an affair with a teenage boy. In her most recent film that is set in the 1840s, Winslet is Mary Anning, a real-life self-taught paleontologist on the Southern coast of England who scrapes by selling fossils as souvenirs to tourists. A male traveler hires her to take care of his wife, who has suffered a personal tragedy, so he can go on his trip. What initially is a testy relationship between the two women turns into a love affair.

Which of these five actresses would you most like to see hoisting Oscar gold again for a lead role? Take the poll below and share your thoughts in the comments.