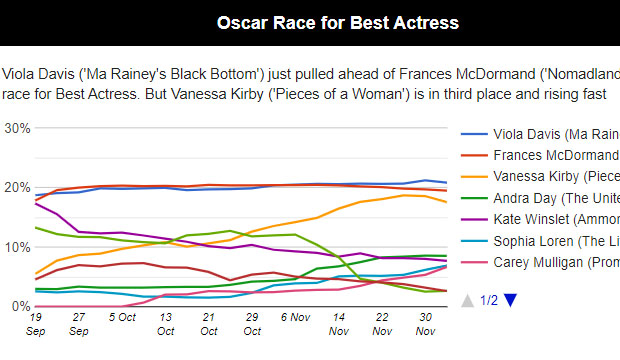 Viola Davis (“Ma Rainey’s Black Bottom“) has been ahead of Frances McDormand (“Nomadland“) in our overall Oscar odds for Best Actress for several weeks, but for most of that time the Expert journalists we surveyed were still giving the edge to McDormand. Not anymore. The Experts have joined the rest of our users in forecasting a Davis victory, but the margin is razor-thin, and there’s an ingenue they both need to keep an eye on: Vanessa Kirby in “Pieces of a Woman.”

SEEAndra Day (‘United States vs. Billie Holiday’) climbs in Best Actress Oscar odds: Could she rise up like Diana Ross?

Compare that to just one week earlier on November 27 when McDormand was backed by nine Experts and Davis had eight. The change is likely due to the fact that journalists got to see “Nomadland” a lot sooner than “Ma Rainey.” McDormand’s film was a darling of festivals earlier in the fall, while Davis’s started screening in mid-November.

SEEOscar spotlight: ‘Minari’ has the pedigree, performances and pastoral beauty for Best Picture

Now Experts have seen that Davis’s turn ticks a lot of the usual boxes of an Oscar-winning performance. She undergoes a physical transformation into a real-life historical figure. And she gives a emotionally expressive performance in a larger-than-life persona, compared to McDormand’s quieter, more internal turn as a woman living out of her van in the American West.

Experts' Oscar Predictions for Best Actress
Viola Davis ('Ma Rainey's Black Bottom') just pulled ahead of Frances McDormand ('Nomadland') in the race for Best Actress. But Vanessa Kirby ('Pieces of a Woman') is in third place and rising fast.

However, both Davis and McDormand have already won Oscars, so if voters don’t feel an urgency to award them again, there’s a potential Oscar newcomer who could steal both of their thunder: Kirby in “Pieces of a Woman.” The academy loves younger actresses giving breakthrough performances in the Best Actress race: consider past wins for Gwyneth Paltrow (“Shakespeare in Love”), Jennifer Lawrence (“Silver Linings Playbook”) and Brie Larson (“Room”) among others.

Kirby’s performance is showy too, especially during one long, unbroken take that dramatizes her character’s traumatic childbirth ordeal. And Kirby has already proven herself as an actress (Emmy-nominated for “The Crown”) and a movie star (joining the “Mission: Impossible” and “Fast and Furious” franchises), so Oscar voters may jump at the chance to anoint her. Three Experts say that she will indeed win: Clayton Davis (Variety), Jazz Tangcay (Variety) and Brian Truitt (USA Today).

Who do you think has the edge in this three-way race, or are there other contenders we’re underestimating? The Oscar nominations won’t be announced until March in this pandemic-extended awards season, so a lot could change between now and then.