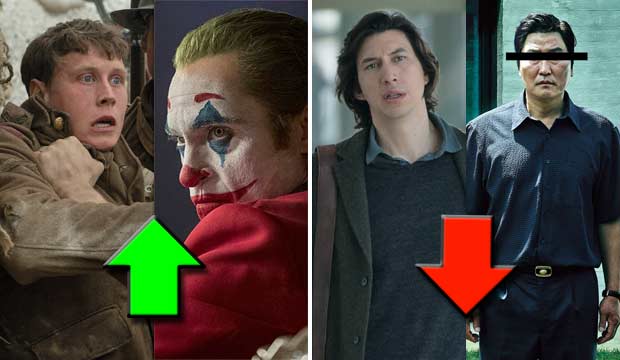 There were nine nominees for Best Picture when the Oscars announced their contenders on Monday morning, January 13. But which films stand the best chance of winning now that we know who’s in the running? Read on to find out which films saw their chances improve and which films took a hit relative to where we thought hey were before nominations were unveiled. And check out the full list of nominations here.

“The Irishman” — Its 10 nominations were a little better than the nine that were predicted by our official odds, but what really matters is that it’s one of only two films that earned nominations in the key categories you usually need to be an Oscar front-runner: writing, directing, acting and editing. The only other film that earned that grand slam wasn’t the one we were expecting it to be …

“Joker” — We knew it would be nominated for Best Picture and Best Actor (Joaquin Phoenix), and by the time our predictions center closed Todd Phillips moved into our top five for Best Director, but this divisive take on the DC Comics supervillain still took us by surprise with its 11 nominations, more than any other film. And like the aforementioned “Irishman,” it’s nominated in the four fields that usually signify an Oscar front-runner.

“1917” — The 10-time Oscar nominee isn’t up for its editing, but it was shot to look like there weren’t any edits, just like another recent film that won Best Picture, “Birdman” (2014), so that’s not necessarily a big loss. What more than makes up for that are nominations in categories where it wasn’t an obvious choice, like Best Visual Effects and Best Makeup and Hairstyling. But most important of all is its bid for Best Original Screenplay, a strong show of support for a film with only two main characters, limited dialogue, and a straightforward story. Films that looked like potential Best Picture front-runners but were snubbed for writing in the last few years ended up losing the top Oscar, like “Gravity,” “The Revenant” and “Dunkirk.” In fact, no film since “Titanic” has won Best Picture without a writing nomination, so that was a huge hurdle for Sam Mendes‘s World War I drama to clear.

“Marriage Story” — It led the Golden Globe nominations with six, and it actually ended up with the exact same nominations at the Oscars: Picture, Actor (Adam Driver), Actress (Scarlett Johansson), Supporting Actress (Laura Dern), Original Screenplay (Noah Baumbach) and Score (Randy Newman). Alas, the film didn’t get anything else. Directing and/or editing noms might have strengthened the film’s candidacy for the top award.

“Parasite” — It earned the key bids for writing, directing and editing, but it didn’t earn a single acting nomination. That’s not a big shock since the film hadn’t earned any individual performance bids from industry groups. And you don’t necessarily need acting noms to win Best Picture, but only two films this century have done so: “The Lord of the Rings: The Return of the King” (2003) and “Slumdog Millionaire” (2008). Also, though the particulars of every year are different, if “Roma” couldn’t win Best Picture last year despite over-performing in acting categories with two bids, can “Parasite” do it without any? It’s definitely possible, but one or two performance bids would have helped its case.

“Ford v Ferrari” — Besides Best Picture, this film is only nominated for its film editing, sound editing and sound mixing. In fact, it has fewer nominations than any other film in the top category. And it didn’t sneak in anywhere we weren’t already expecting. It seemed like an unlikely Best Picture winner before nominations, and now it looks like this is probably your ninth-place movie.

“Jojo Rabbit” — Taika Waititi couldn’t follow his DGA Award nomination with a bid here for Best Director, but he nevertheless earned a nomination for his adapted script, and his film earned a surprise nomination for its editing. That’s similar to what happened to “Green Book,” which had editing, acting and writing nominations but no Best Director bid last year. So while “Jojo” may be an underdog, it still has the potential to be a surprise consensus choice on the Oscars’ preferential ballot.

“Little Women” — Many of our pundits thought Greta Gerwig might still eke out a Best Director nomination despite missing out at the Golden Globes, BAFTAs and DGA Awards. That didn’t happen, but the film still performed a lot better than it did at the Globes and SAG Awards, earning six nominations including acting bids for both Saoirse Ronan and Florence Pugh. And Gerwig did earn a bid for her adapted script. So the glass looks half full to me.

“Once Upon a Time in Hollywood” — No other film performed as consistently on the awards campaign trail leading up to the Oscar nominations, including wins at both the Golden Globes and Critics’ Choice Awards, so there was nowhere for the film to go but down. Indeed, the film’s Oscar snub for Best Film Editing is concerning, but as I mentioned above with “1917,” it’s not an insurmountable loss. Since “Hollywood” still earned a total of 10 nominations — including writing, acting, and directing — I’d say it’s holding more or less steady.