The Oscars announced new rules on April 28. Much attention went to the fact that the academy was relaxing its prohibition against streaming-only movies in light of the coronavirus pandemic forcing theaters across the nation to close. But longtime Oscar watchers picked up on a longer-lasting and potentially more consequential decision: to merge Best Sound Editing and Best Sound Mixing into a single category. Is that a good idea? We asked our readers; scroll down to see their complete poll results.

The decision was mixed, but a majority of our respondents (59%) think “it’s a great idea to merge the categories.” The other 41% say the Oscars “should keep separate categories.” But this isn’t an unheard-of decision. The BAFTAs already honor editors and mixers alike with one award for Best Sound.

There tended to be a high rate of overlap between the nominees and winners for Best Sound Editing and Best Sound Mixing. The two categories were awarded to the same film 7 times in the last 11 years. And just this year the two categories had four out of five nominees in common. So while editing and mixing are different achievements, they tend to be regarded similarly by voters.

That may be in large part because most of the people voting for the winners aren’t sound experts. Though the nominees are chosen solely by members of the sound branch, the winners in all categories are decided by an academy-wide vote, which means that every year you’ve got writers, actors, costume designers, film editors and more professionals in other fields weighing in on what makes great sound, so the most action-packed or most musical movies tend to win.

Do you agree with the majority of our readers that joining the two categories is the right decision for the academy to make? 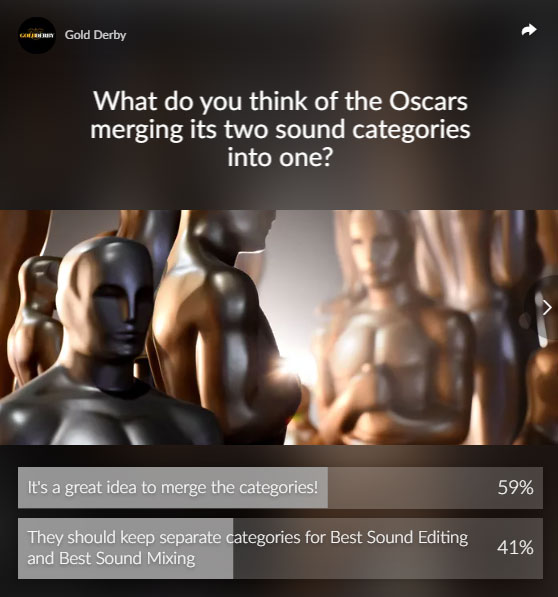