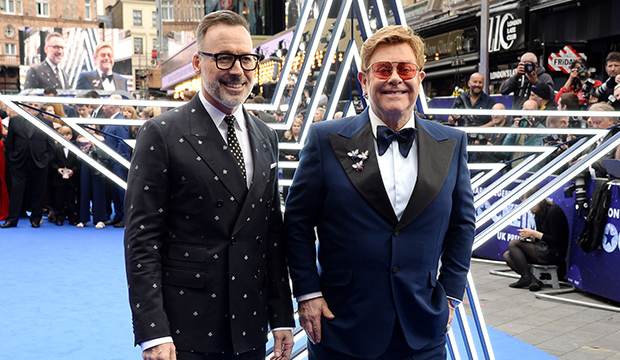 Win or lose, Elton John will be MIA once the Best Original Song winner is revealed at Sunday’s Oscars. That’s because he’s got to book it to his own soiree — his annual viewing party that benefits the Elton John AIDS Foundation.

“We hate to snub the Governors Ball, but this is much more important,” John’s husband and “Rocketman” producer David Furnish told “Entertainment Weekly. “And I’m sure the people at the academy understand that. We’ve lived symbiotically for 28 years, having our fundraiser on academy night, and we’re grateful for the profile they give us.”

The rocker will also perform his nominated tune, “(I’m Gonna) Love Me Again,” at the Oscars, but, as previously announced, without “Rocketman” star Taron Egerton. John and Egerton, who won a Golden Globe and received Screen Actors Guild Award and BAFTA nominations for his turn as the legend, first performed together at last year’s gala, which raised $6 million, three months before “Rocketman” opened.

“Taron finished his ‘Rocketman’ journey at the BAFTAs,” Furnish said. “He has more work to do, he’s had a raft of really fantastic offers. I think he’s earned his place to retire from the ‘Rocketman’ promotional train. And he’s a lifelong friend now. The relationship he and Elton have is very profound and very deep, and our sons adore Taron. They haven’t seen the film — they’re not old enough — but Taron for them is very, very special.”

But that doesn’t mean John will be solo onstage. “He’s performing live with a band and backup singers — and he needs a couple of outfits to wear, one onstage and one after,” Furnish teased.

“(I’m Gonna) Love Me Again,” which is up against tunes from “Harriet,” “Frozen II,” “Toy Story 4” and “Breakthrough,” is the odds-on favorite to take home the Oscar, which would be John’s second — 25 years after he and Tim Rice won for “Can You Feel the Love Tonight” from “The Lion King” (1994). Co-written by John’s longtime lyricist Bernie Taupin, “(I’m Gonna) Love Me Again” nabbed the Golden Globe last month, after which John remarked that that was the first award the pair had ever won together.

“I would love to see Elton and Bernie walk in the door of our party with an Oscar,” Furnish said. “It’s not about Elton getting the recognition — he’s had all the recognition in his life that he needs. It’s about what can you do with that moment, and how can you turn that into something that can save people’s lives and bring communities together in the fight against HIV.”