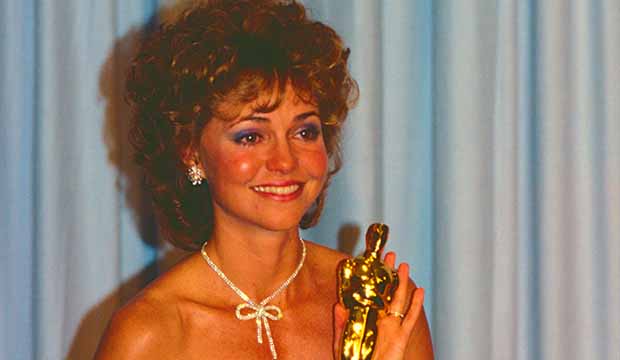 “You like me!” It’s been 35 years since Sally Field‘s memorable Oscar speech. Hosted by Jack Lemmon, the 57th Academy Awards ceremony in March of 1985 saw several significant nominees and winners, and a film about a classic composer was the big winner.

She’s been mimicked, parodied and accused of extreme sappiest. But it cannot be denied that Field gave one of the most enduring Oscar speeches in the history of the awards show. Although she had won five years before for “Norma Rae,” Field expressed that the first time around, she was so stunned she couldn’t take it all in. However, this time she exuded pure joy, and many of us at some point have said something to the effect of “. . . this time I feel it. And I can’t deny the fact you like me. Right now, you like me!”

In the Best Actor category, F. Murray Abraham took home the statue, winning over his co-star Tom Hulce. The two men played rival composers in “Amadeus,” with Hulce playing the title character and Abraham portraying narrator Salieri. This is the last time two actors from the same film have competed in this category.

The Best Supporting Actor category offered a wonderfully diverse group of performers. Nominees included 51-year-old Harlem native Adolph Caesar, nominated for his first major film role in “A Soldier’s Story;” a young John Malkovich for his first film role in “Places in the Heart” and Asian-American Noriyuki “Pat” Morita for “The Karate Kid.” Sir Ralph Richardson received a posthumous nomination for “Greystoke: The Legend of Tarzan,” becoming the oldest nominee (at 82 years, 49 days) in this category up to that time – a record he held for 23 years. The winner for the night was Haing S. Ngor, a Cambodian surgeon with no previous acting experience, who won for “The Killing Fields,” making him the second non-professional actor to win an Academy Award for acting.

In the Best Supporting Actress category, Dame Peggy Ashcroft beat out Glenn Close, Lindsay Crouse, Christine Lahti and Geraldine Page. Ashcroft’s performance in “A Passage to India” made her the oldest winner in this category, a record which stands today.

There were some groundbreaking moments in the musical categories as well. Prince won for Best Original Song Score for “Purple Rain” and Stevie Wonder won Best Original Song for “I Just Called to Say I Love You” from “The Woman in Red,” making this the first ceremony in which multiple African-American nominees won. Due to lack of eligible candidates, this has been the last time the original song score category has been honored; it is also the only time all five nominees in the Best Song category appeared on the Billboard Hot 100, with the list including “Against All Odds,” “Footloose,” “Let’s Hear It for the Boy” and “Ghostbusters.”

Speaking of music, 2020 nominees John Williams and Randy Newman scored nods 35 years ago as well. Williams, who with his current 52 nominations is only second behind Walt Disney as the most-nominated Oscar nominee of all time, had two bids that year – for the scores of “The River” and “Indiana Jones and the Temple of Doom.” Newman, who has earned 29 nods himself, was Williams’ rival for his scoring of “The Natural.” Although neither man won that night (the honor went to Maurice Jarre for “A Passage to India”), Williams has taken home the trophy five times, Newman twice. This year, they appear in different categories, with Williams up for his scoring of “Star Wars: The Rise of Skywalker,” and Newman for his song “I Can’t Let You Throw Yourself Away” from “Toy Story 4.”

Likely overwhelmed by a standing ovation, Best Picture presenter Sir Laurence Olivier failed to list all the nominees, and went straight to opening the envelope and declaring a winner. However, producer Saul Zaentz kindly referred to his competition when he accepted his trophy for “Amadeus.” That film and “A Passage to India” each went into the night with 11 nominations, but the historical biopic about the rivalry between musicians Wolfgang Amadeus Mozart and Antonio Salieri dominated the night with eight wins. “The Killing Fields,” “Places in the Heart” and “A Soldier’s Story” rounded out the category.