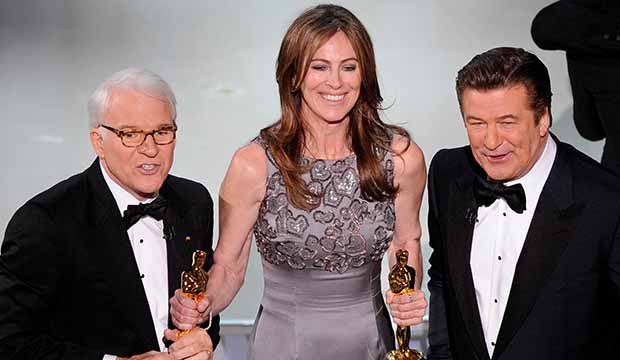 It’s hard to believe that it’s been 10 years since the motion picture academy expanded its number of Best Picture nominees beyond the basic five. In 2009, controversy that “The Dark Knight” (2008) failed to receive a Best Picture bid despite eight nominations because it was a “comic book movie” inspired AMPAS to expand that category. Let’s flashback a decade to 2010 with yet another Quentin Tarantino awards contender, a war film competing for top categories (like “1917” this year), an absurdist World War II movie (like “Jojo Rabbit” this year) and a female director winning her category for the first time ever (and still the only time).

Starting with this 2010 ceremony, hosted by Steve Martin and Alec Baldwin, there could once again be 10 nominees in the big category, harkening back to the 1930s and 1940s when this was common practice. And so 77 years after the WWII drama/romance “Casablanca” beat out nine other films, which encompassed such diverse genres as a western, a screwball comedy, a biopic and a literary adaption, the war drama “The Hurt Locker” beat out competition that included more diversity than in years past – including an animated feature (“Up”), a revisionist take on WWII (“Inglorious Basterds”), a sci-fi thriller (“District 9”) and a 3D fantasy that is still so popular two sequels will be coming out very soon.

No one expected the impact James Cameron‘s “Avatar” would have on the film industry, with some even predicting that it would be a box office disappointment. However, the big-budget film about blue natives from Pandora set box office records, enchanting audiences with its innovative visual effects, and spawning long-awaited sequels that will be released in the next few years. “Avatar” went into award’s night with nine nominations, and left with three wins, all in technical categories (cinematography, visual effects, art direction). It was a lead contender for Best Picture and Best Director, but lost both, ironically to Cameron’s ex-wife.

“The Hurt Locker” also started the night with nine nominations; however, the war drama won six of its awards, including Best Original Screenplay and Best Picture. Kathryn Bigelow made Oscar. This has been an especially contentious topic this awards season, as all five nominees are men in a year in which a record number of women directed films, with a few considered strong contenders in that category – notably Greta Gerwig for “Little Women” and Lulu Wang for “The Farewell.”

One director nominated this year who was also a nominee in 2010. Tarantino is known for his original stories that offer revisionist history, and 10 years ago he was nominated for his writing and direction of “Inglorious Basterds,” which co-starred non-nominated Brad Pitt (now a nominee and potential front-runner for “Once Upon a Time in Hollywood”). His co-star Christoph Waltz won the Best Supporting Actor prize, the same category favored for Pitt in 2020. Although Tarantino lost out on both directing and writing 10 years ago, he may redeem himself this year, with a producer credit also putting him in contention for the Best Picture prize as well as writing and directing.

The 2010 ceremony also paid tribute to a writer/director who, although never nominated, was much loved by members of the industry as well as audiences. John Hughes died the previous August, so Molly Ringwald and Matthew Broderick took to the stage to pay homage to the man who created so many cinematic memories, especially for teens. They shared memories with fellow Hughes favorites Jon Cryer, Anthony Michael Hall, Ally Sheedy, Judd Nelson and Macaulay Culkin. Although he never received any major prizes, the creator of such iconic teen angst films as “Sixteen Candles,” “Pretty in Pink,” “The Breakfast Club,” “Ferris Bueller’s Day Off,” “Home Alone,” Hughes received a just and heartfelt tribute in the end.

Despite Academy efforts, the past ten years has still seen controversies and calls for more diversity. Change often happens slowly, but the expanded Best Picture category has helped to bring attention to a lot of films that might have otherwise been overlooked. In 2010, “Up” became the third animated film to garner a Best Picture nod. The wide range of nominees also included “The Blind Side,” “District 9,” “An Education,” “Precious,” “A Serious Man” and “Up in the Air.” Other acting champs that night were Sandra Bullock, Jeff Bridges and Mo’Nique.