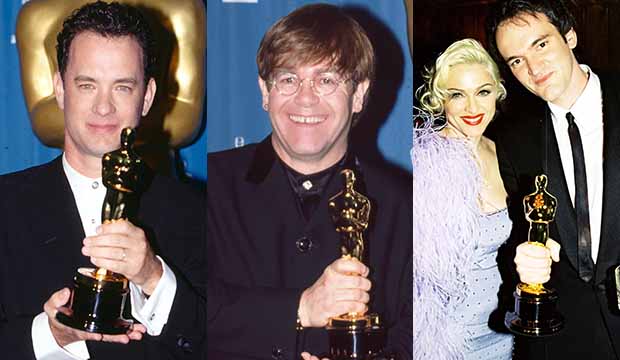 Bet you think I’m about to talk about this year’s Oscar nominees. . . However, this is a flashback to a ceremony 25 years ago that looks a little similar to this year’s lineup. Let’s take a look back at the Academy Awards hosted by David Letterman in March, 1995.

Life indeed can be “like a box of chocolates” and you “never know what you’re going to get,” but I doubt that Hanks expected to be the second actor in the Academy’s history to win the Best Actor trophy two years in a row. A year after winning the statue for his moving performance as an HIV-positive lawyer in “Philadelphia,” Hanks snagged it again as the naive but kind-hearted Forrest Gump. It had been 56 years since Spencer Tracy won his consecutive Oscars (for “Captains Courageous” in 1938 and “Boys Town” in 1939), and no other actor has accomplished this feat since. With his sixth nomination this year, this time for playing Mr. Rogers in “A Beautiful Day in the Neighborhood,” Hanks is back in the game after almost two decades.

Speaking of Hanks, eight months after his success at the 1995 ceremony he had another somewhat successful little movie: the original “Toy Story.” And although it would go on to receive three Oscar nominations, as well as win a special award for its development as the first feature-length computer animated film, the Best Animated Film category did not yet exist. A “Toy Story” film did not win in that category until the third one in 2011– and it was also nominated for Best Picture. Now, 25 years after the beginning of this well-loved franchise, Disney may well see another win, this time for “Toy Story 4.”

Another favorite performer from Oscars 1995 was Sir Elton John, who again this past year composed an original song that Academy voters honored with a nomination, this time for “I’m Gonna Love Me Again” from his biopic “Rocketman.” It was 25 years ago that John and Sir Tim Rice were nominated for not one, but three songs for the now-classic Disney animated film “The Lion King.” Ironically, that film was remade last year as a live action movie (it is competing for Best Visual Effects this time). For the original, John and Rice won for “Can You Feel the Love Tonight” and had bids for “Circle of Life” and “Hakuna Matata.”

“Little Women” also makes a return appearance at this year’s ceremony. The 1995 adaptation of the Louisa May Alcott novel garnered three nominations, and the newest take from Greta Gerwig has earned a total of six. Twenty-five years ago “Jo March” portrayer Winona Ryder lost the Best Actress race to Jessica Lange for her performance in “Blue Sky.” Saoirse Ronan is now up for her performance of the outspoken March sister – can she pull off an upset in that category this year?

Making his first appearance at an Oscar ceremony in 1995 was writer/director Quentin Tarantino for his cult classic “Pulp Fiction.” He took home the prize for his writing (shared with Roger Avary), an accomplishment he would repeat in 2012 for “Django Unchained.” This year marks his fourth nomination for writing, third for directing and first as part of the production team for Best Picture. The director trophy has eluded him both times before, but Hollywood loves a picture about Hollywood, so this may be his year for “Once Upon a Time in Hollywood.”

In 1995, the Best Picture category was still limited to five nominees. “Forrest Gump” was the big winner of the night, coming in with 13 nominations and leaving with six wins, including Picture and Director for Robert Zemeckis, as well as Hanks for Actor. Tarantino’s writing award was the only win of seven nominations for “Pulp Fiction” and the now classic “Shawshank Redemption” received no wins despite seven nominations. “Shawshank” was slow in receiving accolades; in 1995, it was no surprise that “Forrest” ran off with several wins, but today “Shawshank” is considered one of the films that should have won but didn’t. Rounding out the category were “Four Weddings and a Funeral” and “Quiz Show.” The other two acting champs were Dianne Wiest (“Bullets Over Broadway”) and Martin Landau (“Ed Wood”).

Other major tie-ins between the 1995 ceremony and the one coming soon for 2020? Randy Newman was celebrating his sixth Oscar nomination (original song for “The Paper”) and is now on his 21st and 22nd bid (for score of “Marriage Story” and song for “Toy Story 4”). One of the epic films from that year was “Legends of the Fall” starring Anthony Hopkins and Brad Pitt. Those two men are now nominated against each other for Best Supporting Actor in “The Two Popes” and “Once Upon a Time in Hollywood,” respectively.