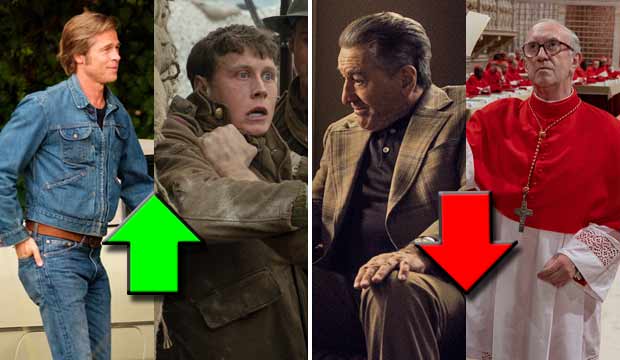 The Golden Globes were the first major stop on the awards campaign trail of 2020, so who’s chances improved, and whose chances are hurt by these results?

It’s important to note that in such a compressed Oscars calendar — the Academy Awards moved up a few weeks to February 9 — the Globes don’t actually have as much time to influence the academy’s nominations since voting ends two days later on January 7. But we often see a lot of rubber-stamping during awards season, so the momentum you gain here can quickly snowball (Critics’ Choice Awards are next on January 12, followed by the SAG Awards on January 19).

So read on to find out who’s up, who’s down, and whose chances are about the same as they were before the Hollywood Foreign Press Association announced their winners.

“1917” — The story of the night was the war film’s victory for both Best Film Drama and Best Director (Sam Mendes). It came into these awards with the exact same nominations “Dunkirk” had a couple of years ago (those two, plus Best Score), and “Dunkirk” came away empty-handed, so I fear the same would happen to this film about a race against time during World War I. Winning here doesn’t guarantee you an Oscar: only five Best Film winners at the Globes have repeated at the Oscars in the last 10 years, even with two Best Film categories at the Globes. But these two victories firmly establish the film among the highest-tier contenders in this year’s race.

“Once Upon a Time in Hollywood” — It was the top winner of the night with three wins. It won the two categories we were predicting it for (Best Film Comedy/Musical and Best Supporting Actor for Brad Pitt), plus another category that was a close call (Best Screenplay for Quentin Tarantino). Those happened to be the exact same categories that “Green Book” won at the Globes last year before it ruled the Oscars. That combined with the fact that other top Oscar contenders under-performed  (“The Irishman” and “Parasite,” more on those below) puts “Hollywood” in an advantageous position.

“The Irishman” — It’s what it is. The fact that the film was shut out wasn’t a complete surprise; the only category we were actually predicting it to win was Best Film Drama. But while it’s not a huge surprise, necessarily, it does put the film in the unfortunate position as the biggest nominee of the night, film or TV, without a single victory. It went zero-for-five, which is reminiscent of another Globes contender that came in hot — “The Post” with six bids two years ago — before it goose-egged on the night of the show.

“The Two Popes” — We weren’t predicting it to win any of its four nominations, but after the film was completely snubbed by the Screen Actors Guild, it could have used a boost here, especially in Best Supporting Actor, where Brit Anthony Hopkins might have hoped to beat a field of Americans in these kudos from the international journalists of the HFPA. The talky drama about two pontiffs chatting about faith was also a plausible contender for Best Screenplay. Alas, nothing but black smoke from the papal conclave this weekend.

“Joker” — I thought the film would win Best Film Drama, but even though it didn’t its two victories keep it steady in the awards conversation. Joaquin Phoenix took Best Film Drama Actor for playing the title character, and Hildur Guðnadóttir was honored for her score. Two out of four ain’t bad.

“Parasite” — We were predicting it to win Best Director (Bong Joon Ho), and it didn’t. That hurts a little. But Bong still got to give a speech onstage just like Mendes and Tarantino because “Parasite” won Best Foreign Language Film, as expected. The night could’ve gone better for the Korean drama, but it still did alright for itself.