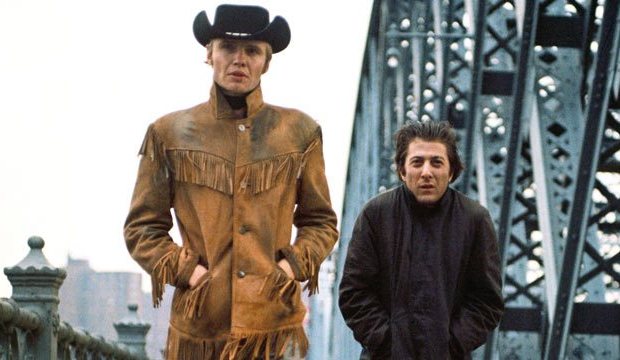 Though the cinematic landscape has changed over the past five decades, one thing has remained the same: the Academy Awards, Golden Globes, National Board of Review of Motion Pictures, New York Film Critics Circle and National Society Film Critics have agreed to disagree on many of their choices of the best of the year. So, let’s travel back to awards season 50 years ago and see what these groups selected as the finest in filmmaker in 1969.

Academy Awards: The year of 1969 was truly a watershed for cinema and the Oscars reflected the numerous changes taking place in Hollywood and internationally. The Academy had one foot in tradition and one foot in contemporary cinema. But in terms of best film, “X” marked the spot as “Midnight Cowboy,” the then-X-rated gritty and poignant drama took home the best picture honor. It was the only time in Oscar history, the Academy gave the to an X-rated film.  “Cowboy” is now rated R. (Nominees: “Anne of the Thousand Days,” “Butch Cassidy and the Sundance Kid,” “Hello, Dolly!” and “Z.”)

Golden Globes: The best picture drama went to the well-crafted but traditional historical drama “Anne of the Thousand Days” chronicling the ill-fated marriage between Henry VIII and Anne Boleyn. (Nominees: “Butch Cassidy and the Sundance Kid,” “Midnight Cowboy,” “The Prime of Miss Jean Brodie” and “They Shoot Horses, Don’t They?)

Best picture comedy or musical: “The Secret of Santa Vittorio,” a rarely seen (I’ve never watched it) comedy based on the best-selling novel about an Italian town during World War II who tries to hide their wine from the Nazis. (Nominees: “Cactus Flower,” “Goodbye, Columbus,” “Hello, Dolly!” and “Paint Your Wagon”)

National Board of Review of Motion Picture: “They Shoot Horses, Don’t They?” the gritty and harrowing Depression-era drama.

Academy Awards: Though young Hollywood was pulling for either Dustin Hoffman or Jon Voight to win best actor for “Midnight Cowboy,” it was veteran John Wayne who picked up his only Oscar for his larger-than-life performance as Rooster Coburn in “True Grit.” I thought Wayne was so old when he won the award. He was only 62! (Nominees: Richard Burton for “Anne of a Thousand Days,” Hoffman, Peter O’Toole for “Goodbye Mr. Chips” and Voight.)

Best actor comedy or musical:  O’Toole for “Goodbye, Mr. Chips,” the musical version of the James Hilton story of a beloved schoolteacher. Robert Donat had won the best actor Oscar for the classic 1939 dramatic version. (Nominees: Hoffman for “John and Mary,” Lee Marvin for “Paint Your Wagon,” Steve McQueen for “The Reivers” and Anthony Quinn for “The Secret of Santa Vittorio.”)

National Board of Review:  Peter O’Toole

Academy Awards: Maggie Smith earned her first Oscar as an influential teacher in “The Prime of Miss Jean Brodie.” (Nominees: Genevieve Bujold for “Anne of the Thousand Days,” Jane Fonda for “They Shoot Horses, Don’t They,” Liza Minnelli for “The Sterile Cuckoo” and Jean Simmons for “The Happy Ending.”)

Best actress comedy or musical: Patty Duke for the rarity “Me Natalie,” which marked the film debut of Al Pacino. Duke wore fake teeth and nose to play an ugly duckling who finds love. (Nominees: Ingrid Bergman for “Cactus Flower,” Cannon, Kim Darby for “Generation,” Mia Farrow for “John and Mary,” Shirley MacLaine for “Sweet Charity,” Anna Magnani for “The Secret of Santa Vittorio” and Barbra Streisand for “Hello, Dolly!”)

National Board of Review: Geraldine Page for “Trilogy,” a rarely screened anthology drama directed by Frank Perry and penned by Truman Capote.

New York Film Critics: Jane Fonda (Runners-up: Vanessa Redgrave for “The Loves of Isadora” — she was nominated for a best actress Oscar the year before — and Smith)

National Board of Review: I love Alfred Hitchcock but was shocked to learn he was the choice for best director for the rather mediocre “Topaz.”

National Society of Film Critics: Francois Truffaut for “Stolen Kisses,” his charming sequel to “The 400 Blows.” (Runners-up: Costa-Gavras, Claude Chabrol for “The Unfaithful Wife” and Miklos Jancso for “The Red and the White”)

Academy Awards: Goldie Hawn, who came to fame on” Rowan & Martin’s Laugh-In” as an adorable kook, won for her performance as an adorable kook in “Cactus Flower.” (Nominees: Catherine Burns for “Last Summer,” Dyan Cannon for “Bob & Carol & Ted & Alice,” Sylvia Miles for “Midnight Cowboy” and Susannah York for “They Shoot Horses, Don’t They?”)

National Board of Review: Pamela Franklin as one of the teacher’s favorite pupils in  “The Prime of Miss Jean Brodie”

Academy Awards: Though the young turks were pushing for Jack Nicholson as the alcoholic Southern lawyer to win for “Easy Rider,” the Oscar went to veteran Gig Young for “They Shoot Horses, Don’t They?” as the ruthless MC of a dance marathon. Of course, Nicholson went on to win three Oscars. (Nominees: Rupert Crosse for “The Reivers,” Elliott Gould for “Bob & Carol & Ted & Alice,” Nicholson and Anthony Quayle for “Anne of the Thousand Days.”)

National Board of Review: “Topaz” wins again with Philippe Noiret as a NATO official taking the honors.