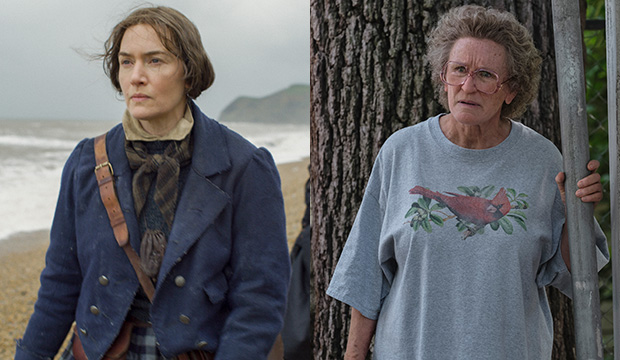 They took very different paths getting there, but Kate Winslet and Glenn Close could both join the small club of eight-time Oscar nominees this season. Winslet is currently in fifth place in our Best Actress odds for “Ammonite,” while Close is predicted to win Best Supporting Actress for “Hillbilly Elegy.”

If they make the cut, they’d be the sixth and seventh actors to accrue eight bids. Only eight people have more, the most, of course, being 21, amassed by Meryl Streep. The first five eight-time nominees are Marlon Brando, Jack Lemmon, Peter O’Toole, Geraldine Page and Denzel Washington. All won at least once except for O’Toole, who is the most nominated performer without a victory, a title Close would share if she loses again. Winslet doesn’t have to worry about that since she won her Oscar for “The Reader” (2008) in Best Actress.

With that nomination, Winslet broke Bette Davis‘ record by a year as the youngest performer to receive six nominations, accomplishing it at 33. She also holds the record as the youngest to get five, being 31 when she contended in Best Actress for “Little Children” (2006). For a while there, it felt Winslet was amassing Oscar nominations every other year, but that pace has slowed over the past decade-plus. She snagged her first four nominations in the late ’90s and early ’00s for 1995’s “Sense & Sensibility” (Best Supporting Actress), 1997’s “Titanic” (Best Actress), 2001’s “Iris” (Best Supporting Actress) and 2004’s “Eternal Sunshine of the Spotless Mind” (Best Actress).

After her triumph, Winslet didn’t return to the Oscar fray until 2015’s “Steve Jobs,” for which she earned a supporting bid and won the Golden Globe and BAFTA. The seven-year gap is her longest between nominations.

This five-year gap would be Winslet’s second longest. In “Ammonite,” she plays real-life paleontologist Mary Anning, who embarks on a romance with a young geologist, Charlotte Murchison (Saoirse Ronan). Winslet and Ronan received praise for their onscreen chemistry in the film, which was one of the first high-profile contenders that premiered this fall.

Winslet trails Viola Davis (“Ma Rainey’s Black Bottom”) and Frances McDormand (“Nomadland”), who are neck and neck in first and second in our odds. Vanessa Kirby (“Pieces of a Woman”) is in third and Close’s co-star Amy Adams is in fourth.

Close collected her first five nominations in rapid succession as well — faster, in fact. She was up for Best Supporting Actress three years in a row for “The World According to Garp” (1982), “The Big Chill” (1983) and “The Natural” (1984) and then closed out the ’80s with her first two Best Actress bids for “Fatal Attraction” (1987) and “Dangerous Liaisons” (1988). But it would be another 23 years before Close returned to the ring with a Best Actress nomination for “Albert Nobbs” (2011). Her most recent nomination was for “The Wife” (2018), and she was widely predicted to win, but ended up losing the Best Actress statuette to Olivia Colman (“The Favourite”).

Close and Colman could very well face off again, as the latter is in the running with “The Father.” She’s second in our odds behind Close, who is seeking her first supporting bid since her one for “The Natural.” Like Winslet, Close is also contending with a portrayal of a real person — she plays Mamaw, the hard-edged, chain-smoking and “Terminator”-loving grandmother of J.D. Vance (Gabriel Basso) in “Hillbilly Elegy,” which is based on Vance’s memoir of the same name. It’s a transformative turn, and combined with her legend and overdue statuses, that could be enough to secure a win.

Following Close and Colman are Amanda Seyfried (“Mank”), Ellen Burstyn (“Pieces of a Woman”) and Ronan in third, fourth and fifth, respectively. 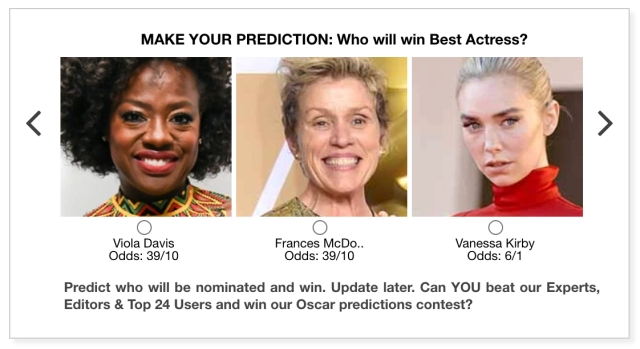 Glenn Close Oscar nominations: All 7 bids including 'The Wife'