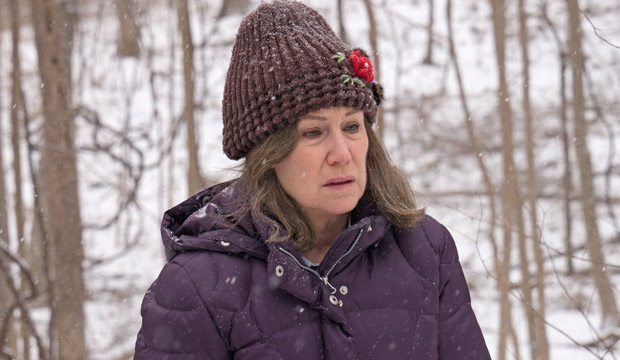 We don’t see protagonists like Mary Kay Place’s titular role in “Diane” every day. Diane is the type of woman that is hard to summarize in an elevator pitch. She is a compassionate New England woman who tirelessly puts others before herself, but she’s no saint. She’s tough on her drug-addled son (Jake Lacy) but constantly over-provides for him. She is also haunted by a past transgression that we don’t find out about until the movie’s third act, which helps to explain her compulsive need to do as much good as she can to those around her. All of this could sink or swim depending on the actress in the lead role, but Place knows exactly who Diane is and in the process, delivers one of the most Oscar-worthy performances of the year.

What Place is able to do in “Diane” is reminiscent of Frances McDormand’s Emmy-winning performance in “Olive Kitteridge.” Both Diane and Olive carry the weight of past mistakes as they go about their days trying to help others in their own highly specific ways. Diane may be a little more charitable than Olive, but they each have a sense of duty to doing what’s right, because that’s how things are done in this part of the world. Like McDormand, Place relies on her expressive face to communicate her character’s inner turmoil. We frequently see her driving alone in her car, those little moments of solitude revealing something more that’s lurking beneath the surface of her outwardly helpful demeanor.

Diane is all too familiar to those who grew up in New England, happy to bring over a casserole or volunteer at a homeless shelter but not someone you would dare cross. There is a weary spirit to women of this sort. They’ve gone through the hard knocks of life, the changing seasons, the sudden loss of friends, and they know what’s coming around the corner. So they do the best they can. This is why Place’s performance has resonated, because she gets to the heart of a woman barely ever seen on the big screen. Her brilliance is not in the typical over-the-top shouting or crying scenes we often see in a Best Actress lineup, but in a moment between friends where things get too real and we see Diane’s friendly facade crack ever so slightly.

SEE2020 National Society of Film Critics Awards: Complete list of winners including ‘Parasite,’ ‘Little Women,’ ‘Once Upon a Time in Hollywood’

This being Place’s first lead role at the age of 71 after decades of standout supporting parts in films like “The Big Chill” and “Being John Malkovich” just makes this performance all the more special. She has picked up key critics awards for her performance in “Diane,” most notably from the Los Angeles Film Critics Association and the National Society of Film Critics in addition to a nomination from the Independent Spirit Awards. Unfortunately, “Diane” is such a small film that barely made a dent at the box office, so she has not been able to translate her critical success into major award nominations.

While many have narrowed down the Oscar Best Actress possibilities to seven other contenders, Place is not totally out of it just yet. Once in a while we see an actor earn Oscar love after skipping the major precursors, like Marina de Tavira just last year for “Roma.” Of course, “Roma” co-led the Oscar nominations so it was already being heavily watched by voters. A better comparison may be the bids Laura Linney (“The Savages”) and Tommy Lee Jones (“In the Valley of Elah”) received in 2007. Neither film was exactly at the top of screener piles and neither actor received nominations from Critics’ Choice Awards, Golden Globes, SAG or BAFTA. But they received notable critic attention and were able to leap into the Oscars over heavily predicted contenders. Diane is an unassuming woman with a quiet strength, so it would be oddly fitting for Place’s performance to quietly sneak her way into Best Actress as well.