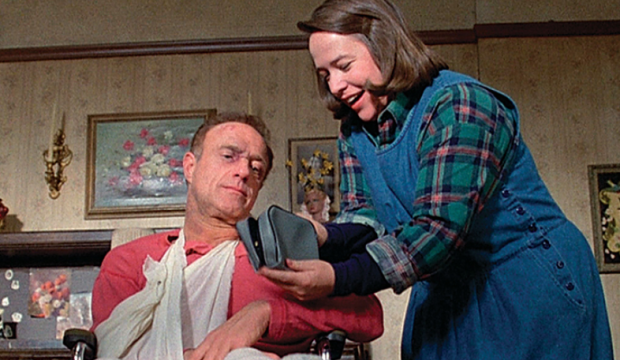 We all know the saying that “misery loves company.”

But does Oscar love misery?

That was the question being asked three decades ago, when the much-anticipated film adaptation of Stephen King’s 1987 best-seller “Misery” hit theaters. The movie received positive reviews, with critics largely focusing on the performance of its relatively unknown star, Kathy Bates. As an obsessed fan who rescues and nurses her favorite novelist (played by James Caan) after a car accident, Bates had audiences howling – and in more ways than one.

Despite the awards-unfriendly horror genre and the pre-internet era, Oscar buzz for Bates quickly emerged. When asked by People magazine in December about possible academy recognition, she nervously responded “I’m trying not to think about it.”

Academy members themselves had a lot to think about in terms of filling the five Best Actress slots. Anjelica Huston, 1985’s Best Supporting Actress for “Prizzi’s Honor,” seemed poised for her first lead nomination for her role as a con artist in the crime thriller “The Grifters.” (The Los Angeles Film Critics Association honored her as Best Actress for her work in both that film and the dark fantasy “The Witches.”)

1957’s Best Actress for “The Three Faces of Eve,” Joanne Woodward, appeared to be a safe bet to receive her fourth nomination for her portrayal of a Kansas City housewife in the 20th century period drama “Mr. and Mrs. Bridge.” (The New York Film Critics Circle circled her as the year’s Best Actress.)

And Meryl Streep, 1979’s Best Supporting Actress for “Kramer vs. Kramer” and 1982’s Best Actress for “Sophie’s Choice,” looked like a logical choice for her turn as an actress recovering from drug addiction in the dramedy “Postcards from the Edge.”

On the outer edges of the competition was 1990’s breakout star Julia Roberts in the smash comedy “Pretty Woman.” Roberts had contended (unsuccessfully) for Best Supporting Actress the previous year for “Steel Magnolias.” Could her “Pretty” hooker with the heart of gold hook her up with Oscar gold? Given the stiff competition, it seemed pretty unlikely.

When Oscar nominations were announced in February, Huston, Streep and Woodward all made the cut. Recent Golden Globe winner (Best Actress in a Motion Picture – Drama) Bates was also on the list. The only surprise was the inclusion of another fresh Golden Globe recipient (Best Actress in a Motion Picture – Comedy or Musical) – Roberts. The reading of her name actually drew gasps from press members assembled at the live announcement. Still, her star power was sure to bring more excitement to the Oscar ceremony.

Speculation quickly turned to who was most likely to succeed out of 1990’s class of leading ladies. Huston and Woodward were considered the early favorites, due to both being Hollywood royalty and both acting in serious, artsy features. Bates was something of a dark horse, given her lack of name recognition and unconventional Oscar vehicle. And Roberts was very much a wild card. As an exciting ingénue in a feel-good film facing off against veterans in more polarizing pictures, an upset might have been brewing. (She could have pulled off a Marisa Tomei in “My Cousin Vinny” before Marisa Tomei in “My Cousin Vinny.”)

The freshly-minted Entertainment Weekly issued its first annual “Total Oscar” edition, which attempted to handicap the odds in all of the major categories. Nominees were given points (both pluses and minuses) for their various pros and cons. In the Best Actress race, Woodward received the most points – largely for her “impeccable credentials – four nominations in different decades.” Huston was a very close second, due to her huge collection of critics’ kudos and being the only contender whose “film was nominated in other major categories.” Huston’s problem? She also played an “unsympathetic part in a nihilistic film.” Roberts was in third place, and the magazine acknowledged that her “name on the marquee meant more than the other four women combined” though she was also in a “silly movie.” Surprisingly, Bates finished fourth. She was given high marks for her “good breeding” on the “New York stage.” Yet she was penalized for being in a “Stephen King movie.” (The future EW columnist King wrote to the magazine to take issue with that statement, pointing out that “Kathy did a great job.”) Meanwhile, Streep was dead last. Her biggest positive: “No accent this year.”

In their annual “If We Picked the Winners” TV episode of “At the Movies,” the late film critics Gene Siskel and Roger Ebert both selected Huston. Siskel explained that he picked her over Bates because “Bates has two speeds to her performance (fan and fanatic,) while Huston has many more rhythms – and is equal to them all.” Interestingly enough, the sagacious Siskel didn’t think that Huston wouldn’t win the Oscar “because her character isn’t likable.” An uppity Ebert chimed in and said that “voters sometimes choose someone whom they would like to spend the evening with.” A puzzled audience member asked why Roberts was nominated in the first place, revealing that she “like the movie a lot and liked her performance…but Best Actress?” Ebert responded that “that question comes up again and again” and that “it didn’t surprise me and it didn’t bother me” He elaborated further. “She sells the role. She makes us care about that woman. There are enormous gaps of logic in that movie. The ending doesn’t work too well. There are a lot of questions that we could ask while she’s on screen – but we don’t. That’s something important that an actress can do – so let’s nominate her, that’s my opinion.” The studio audience applauded with approval.

On the Friday before the big event, the hosts of “Entertainment Tonight” also offered their (dueling) predictions for Best Actress. John Tesh was on board with Bates, declaring “I’m going to win that.” Leeza Gibbons went with Huston, casting doubts on Tesh’s prognostication. “I don’t think Bates will win. It’s her first time out.”

When the time finally came for the Academy Awards, only three of the five Best Actress nominees would attend. (Streep and Woodward both skipped the show.) 1989’s Best Actor for “My Left Foot” Daniel Day-Lewis opened the envelope and declared Bates the Oscar winner. A relieved Bates kissed her then-fiancé Tony Campisi as well as her director Rob Reiner before making her way to the stage. She smiled warmly as she passed Huston, who graciously offered her a congratulatory kiss.

Bates thanked the academy, “I’ve been waiting a long time to say that.” She also thanked Reiner and King. She offered special thanks to her co-star Caan, and apologized “publicly for the ankles.” She added that “I really am your number one fan, Jimmy.” She was in tears by the time that she finished. “To my father, who I hope is watching somewhere…I would like to say thanks.”

Some observers attributed the victory by Bates to a split between Huston and Woodward. (Both being previous winners also worked against them.) In hindsight, Bates did deliver the most dramatic punches of anyone in the category. And she was showcased in close-ups during much of her movie. Only a “lying dirty birdy” could deny the brilliance of her truly chilling performance.

Bates’ Academy Award for “Misery” has yet to have company. Three Best Supporting Actress nominations (for 1998’s “Primary Colors,” 2002’s “About Schmidt” and 2019’s “Richard Jewell”) failed to carve her another gem. Nonetheless, she can always look back happily at 1990. And thank “Misery” for bringing her the joy of Oscar.