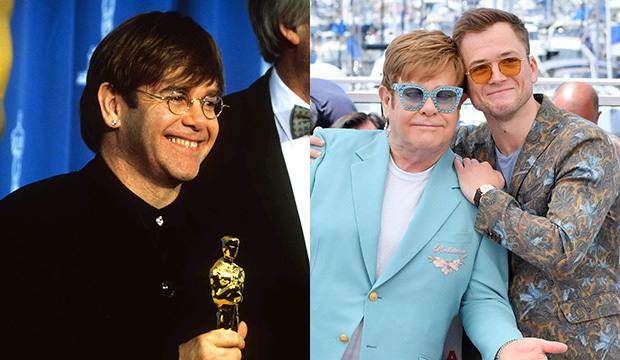 With his victory for “(I’m Gonna) Love Me Again” from “Rocketman,” Elton John set a record for the longest gap between Best Original Song wins at the Golden Globes at 25 years — and he could set the same record at the Oscars.

Like at the Globes, the pop-rock legend won his first and only Best Original Song Oscar for “Can You Feel the Love Tonight” from “The Lion King” (1994), which he shared with lyricist Tim Rice. The pair was also shortlisted for two other songs from the Disney classic, “Circle of Life” and “Hakuna Matata.” John hadn’t been nominated since until now.

The Oscar record is held by Will Jennings, who won his statuettes 15 years apart for two hit power ballads, “Up Where We Belong” from “An Officer and a Gentleman” (1982) and “My Heart Will Go On” from “Titanic” (1997). Twenty-five other people have snagged multiple original song Oscars, but most don’t have lengthy spreads between any two wins. Rice, for example, has three Oscars, all two years apart for “A Whole New World” from “Aladdin” (1992), “Can You Feel the Love Tonight” and “You Must Love Me” from “Evita” (1996).

Kristen Anderson-Lopez and Robert Lopez, John’s competition this year for “Into the Unknown” from “Frozen II,” claimed their two Oscars four years apart for “Let It Go” from “Frozen” (2013) and “Remember Me” from “Coco” (2017). Randy Newman, another current rival with “I Can’t Let You Throw Yourself Away” from “Toy Story 4,” waited nine years in between wins for “If I Didn’t Have You” from “Monsters, Inc.” (2001) and “We Belong Together” from “Toy Story 3” (2010).

John, who will perform at the ceremony, co-wrote “(I’m Gonna) Love Me Again” with his longtime lyricist Bernie Taupin, who’s celebrating his maiden Oscar bid. The duo, who, as John mentioned in his Globes speech, had never won an award together until then, is in sitting pretty first place in our predictions with 16/5 odds. “Stand Up” from “Harriet,” penned by Cynthia Erivo and Joshuah Brian Campbell, is in second place, with the Lopezes in third an Newman in fourth. Eleven-time nominee Diane Warren is in fifth for “I’m Standing with You” from “Breakthrough.”