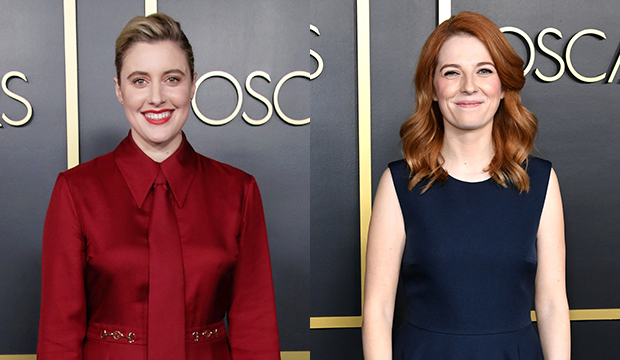 Of the 13 people nominated for the Best Adapted and Original Screenplay Oscars this year, only two are women — one in each category: Greta Gerwig, who adapted “Little Women,” and Krysty Wilson-Cairns, who co-wrote “1917” with Sam Mendes. And if either Gerwig or Wilson-Cairns wins, it’d end a 12-year long drought for female champs in the writing categories.

The last woman to nab a writing Oscar, solo or as part of a team, was Diablo Cody in original for “Juno” (2007). In adapted, the dry spell is even longer at 14 years, with Diana Ossana being the most recent, having won for her “Brokeback Mountain” (2005) script with Larry McMurtry. Since Cody’s golden night, 12 women have received bids in the original category, including Wilson-Cairns and Gerwig two years ago for “Lady Bird” (2017), while 14 women have been shortlisted since Ossana’s triumph, including Gerwig this year.

As with most non-gendered Oscar categories, there’s not a ton of female writing champs. Only seven times has the adapted honor gone to women, with Ruth Prawer Jhabvala prevailing twice for “A Room with a View” (1986) and “Howards End” (1992), and Fran Walsh and Philippa Boyens sharing a victory with Peter Jackson for “The Lord of The Rings: The Return of the King” (2003). The first woman to win in adapted was Sarah Y. Mason for the script to the 1933 version of “Little Women,” shared with her husband Victor Heerman. Counting the now-defunct Best Story category, there have been 12 instances of the original prize going to women.

The current 12- and 14-year droughts are the second longest in both categories; there was 42 years between Claudine West‘s win for “Mrs. Miniver (1942) — shared with George Froeschel, James Hilton and Arthur Wimperis — and Jhabvala’s first Oscar for “A Room with a View” in adapted, and 23 years between Sonya Levien‘s Oscar for “Interrupted Melody” (1955), shared with William Ludwig, and Nancy Dowd‘s for “Coming Home” (1978), shared with Robert C. Jones and Waldo Salt in original. So, yeah, the mid-20th century was bleak for women writers.

Fresh off her USC Scripter win, Gerwig is the odds-on favorite to win adapted over Taika Waititi‘s “Jojo Rabbit,” Steve Zaillian‘s “The Irishman,” Todd Phillips and Scott Silver‘s “Joker,” and Anthony McCartern‘s “The Two Popes.” “1917” surprised with a VIN (very important nomination) in original screenplay since it missed in two other Best Picture predictive categories, acting and editing. But the nomination shall be the reward (and possibly key to a Best Picture win) as it’s last in our predictions. Quentin Tarantino‘s “Once Upon a Time in Hollywood” is expected to win, with “Parasite” (Bong Joon Ho and Han Jin Won) in second, “Marriage Story” (Noah Baumbach) in third and “Knives Out” (Rian Johnson) in fourth.

And if neither Gerwig nor Wilson-Cairns snatches the gold, not only would this drought continue on another year, it would mean that the 2010s would be the first decade since the 1960s not to produce a female winner in either writing category.