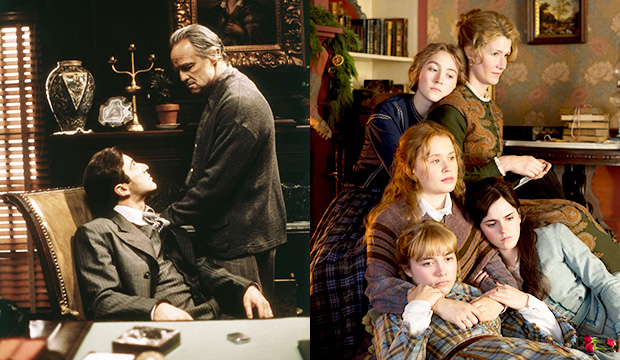 Jo March and Vito Corleone have nothing in common besides being iconic literary and film figures, but they may soon have some shared Oscar history. If Greta Gerwig wins Best Adapted Screenplay, as our odds are forecasting, “Little Women” would join “The Godfather” as two-time Oscar-winning source material.

Harry Seagall‘s play “Heaven Can Wait” came close to producing two wins: Sidney Buchman and Seton I. Miller prevailed for their 1941 adaptation, “Here Comes Mr. Jordan,” but Warren Beatty and Elaine May lost for their 1978 version, which shared the same name as the play.

Louisa May Alcott‘s timeless “Little Women,” first published in 1868, gave us the first female winner in this category. At the 6th Academy Awards, Sarah Y. Mason won for and her husband Victor Heerman‘s 1933 adaptation, which starred Katharine Hepburn as Jo. Theirs is one of two that all of the Oscar-nominated versions of “Little Women” have won; the second one was for the art direction of the 1949 adaptation. None of the others received screenplay nominations until Gerwig.

Gerwig, who was nominated in the original category for “Lady Bird” (2017), holds a 17/5-odd lead over her closest competitors, Taika Waititi‘s “Jojo Rabbit” and Steve Zaillian‘s “The Irishman,” which are neck and neck in second and third, respectively. A lifelong fan of “Little Women,” Gerwig rejiggered the beloved 150-year-old story into a fresh, vibrant and meta script by grafting two timelines on top of each other. She won the USC Scripter Award on Saturday, boding well for her chances, as it aligned with the Oscars for eight consecutive years until last year, when Oscar-snubbed “Leave No Trace” won, while Oscar winner “BlacKkKlansman” was Scripter-snubbed.

Furthermore, Gerwig’s directing snub could be a blessing in disguise as this is the sole category in which supporters could vote for her since she’s not a producer on “Little Women,” not to mention this and costume design are arguably the two races the film has the best chance of winning.

In fourth place in our odds is Todd Phillips and Scott Silver‘s “Joker,” followed by Anthony McCarten‘s “The Two Popes.” If “Little Women” can pull this out and join “The Godfather,” this is definitely something for Jo to write about.