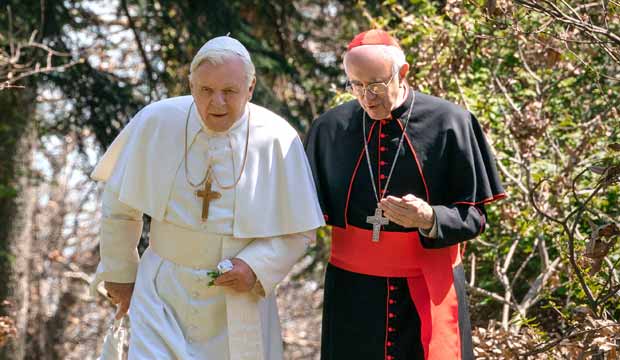 Did “The Two Popes” just miss out on a Best Picture Oscar nomination? That’s what a leading 48% of readers believe who voted in our our recent poll. You see, Academy Awards voters are allowed to nominate 10 movies for Best Picture, but this year they decided only to recognize nine: “Ford v Ferrari,” “The Irishman,” “Jojo Rabbit,” “Joker,” “Little Women,” “Marriage Story,” “1917,” “Once Upon a Time in Hollywood” and “Parasite.” Had they nominated the maximum, our readers think “The Two Popes” would have nabbed that 10th slot. Talk about a true Oscars tragedy!

In 2011 the academy changed the number of Best Picture nominees to be a sliding scale between five and 10, but since then only eight or nine have been recognized each year. Per the Oscars rule book, in order to be nominated a movie must earn 5% of first-place rankings. Why the change? Academy exec Bruce Dern explained at the time, “If there are only eight pictures that truly earn that honor in a given year, we shouldn’t feel an obligation to round out the number.”

Rian Johnson‘s “Knives Out” also earned love in our poll results, with 27% of users believing it was the likeliest 10th-place Best Picture nominee. The quirky whodunit earned an Oscar nomination for Best Original Screenplay, but that’s it. None of its sprawling cast members (including Golden Globe nominees Daniel Craig and Ana de Armas) or behind-the-scenes artisans received any recognition.