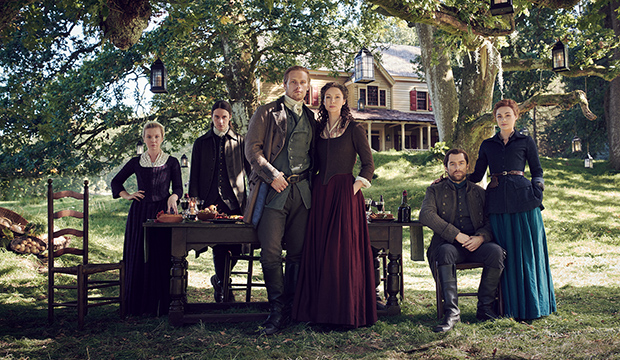 The Droughtlander is almost over. “Outlander” returns in a month, but you can tide yourself over with the new Season 5 video and photo that Starz released Tuesday.

Season 4 ended with Jamie (Sam Heughan), Claire (Caitriona Balfe) and Brianna (Sophie Skelton) reunited in Fraser’s Ridge, as are Brianna and Roger (Richard Rankin), while Jamie got one helluva an order from Gov. Tryon (Tim Downie): kill Murtagh Fitzgibbons (Duncan Lacroix).  With the American Revolution looming, Season 5 will find the clan perhaps in more danger than ever and “fighting for their family and the home they have forged on Fraser’s Ridge,” per Starz.

“I feel it’s a very strong season and I think Jamie is in a really, really though position. He’s really trying to provide for everyone,” Heughan says in the behind-the-scenes video below. “Through that, he agrees to work for the British and he has to lead a militia against the Regulators.”

During the show’s panel at Tuesday’s Television Critics Association press tour, Heughan explained why he pushed for Jamie to don a red coat, a storyline that’s not in the books on which the show is based. “I thought it was a strong visual for Jamie to go against everything he fought for and what he stands for. His relationship to the British, to what uniform represents has been pretty bad at best,” he said. “The redcoats really suppressed the Scots. For him to have to wear a red coat, it’s a storyline that’s not so much in the book, but the writers did a great job really digging into that storyline. We see Jamie have to go against everything he stands for for the greater good, for the people he’s trying to protect. To see Jamie Fraser in a red coat, for me, was kind of full circle and kind of terrifying at the same time.”

SEE ‘This season is about family’: Watch the ‘Outlander’ Season 5 trailer

Claire, meanwhile, must reconcile being a “healer” with the repercussions of messing with time. Wanting to help the 18th century with her 20th century medical knowledge and advancements, Claire will take a lot of risks this season, Balfe teased Tuesday. “We see that she takes these big chances in exploring surgery that she would’ve done in the 20th century and also trying to develop maybe develop medicines that she would’ve used in the 20th century. But that definitely is a very risky endeavor for Claire this season.”

One thing that hasn’t changed this season is the “passion” between the couple. And the fact they’re actually in the same place this season is a boon for more quiet, intimate scenes. “We see a lot more of the intimacy and the passion of Claire and Jamie because we have that luxury of them being in one place a lot of the time. And it’s so nice,” Balfe shared. “We get to see how they work together as a couple. The strains and the pressures of these outside things — they’re able to come together and touch base with each and support each other, and it’s really lovely just to see them converse as a couple in this emotionally supportive way.”

Added Heughan: “They have both quite different lives apart from each other … but they touch base. They always need and yearn for each other. They reconnect. It’s those moments we see that are quite domestic and it’s their whole life and it’s actually really quite touching. Those are the really fun scenes to play, just to see them need each other and reconnect.”