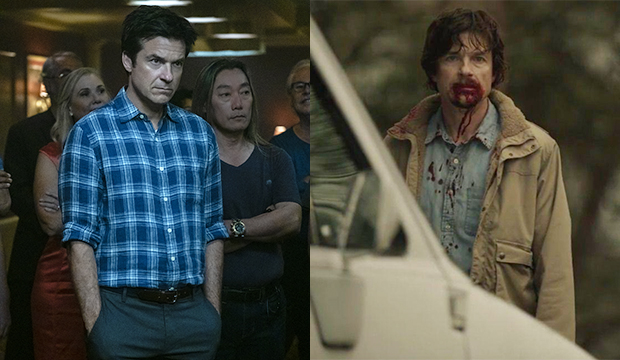 Having racked up dual Emmy acting nominations for “The Outsider” in Best Drama Guest Actor and “Ozark” in Best Drama Actor, Jason Bateman is primed to pull off the highly specific thing Ann Dowd did three years ago: win a main acting race for a show nominated for Best Drama Series while also competing in a guest acting category as a show’s only bid.

In 2017, Dowd double-dipped for “The Leftovers” in drama guest actress and “The Handmaid’s Tale” in drama supporting actress, triumphing for the latter. While her victory for “Handmaid’s” was part of the Hulu series’ sweep – it collected eight statuettes, including Best Drama Series – her nom for “The Leftovers’” was the HBO series’ lone Emmy bid in its entire three-season run, thus a clear manifestation of support for the veteran actress (who was celebrating her first two career noms that year).

Similarly, Bateman being “The Outsider’s” only citation hints at considerable support for the actor, who, despite winning Best Drama Directing for “Ozark” last year, has never won an acting Emmy – he now has six bids between “Arrested Development” (2005 and ’13), “The Outsider” and “Ozark” (2018-20). Since all non-program categories are voted on by their corresponding peer groups (the directing categories are voted on by directors only, etc), he can still cash in his Emmy IOU.

But for which one of “The Outsider” or “Ozark” would he prevail? When actors are double-nominated, they are typically rewarded for the project in which they’re more prominently featured (Dowd for “Handmaid’s”), so in Bateman’s case, “Ozark.” In line with the stoicism of his character Marty, Bateman’s performance is mainly subdued, but as the third season delves into Marty’s headspace, the actor gets to peel back many of his layers. In the fourth episode, “Boss Fight,” Marty is kidnapped and brought to Navarro’s (Felix Solis) home in Mexico, where he not only experiences flashbacks to his father’s death but expresses his fear of Wendy (Laura Linney) to Navarro. This latter action lays the groundwork for a loaded therapy session between Marty and Wendy in Bateman’s Emmy submission, “Su Casa Es Mi Casa,” the sixth hour, an immaculate two-hander between Bateman and Linney, in which the former breaks free from his character’s stoicism and unloads his rage. To cap it off, he gets to play Marty’s softer, more tender sides as he comforts Wendy after her brother Ben’s (Tom Pelphrey) death in the finale.

In the drama actor category, Bateman faces “Succession’s” Brian Cox and Jeremy Strong, “Pose’s” Billy Porter, “The Morning Show’s” Steve Carell and “This Is Us’” Sterling K. Brown. In our combined odds, he trails Cox and Strong, but could he benefit from the Roy father-son duo splitting the vote? Despite Linney sitting in the driver’s seat in the third season, Bateman, who also serves as an executive producer, is still seen as the face of the show. He was nominated for acting and directing for its debut installment in 2018 when neither the series nor any of his co-stars were, and he won the drama actor Screen Actors Guild Award last year. Defending champ Porter slowly stole his thunder en route to last year’s Emmys, but collective goodwill could tip him over the edge this time around, especially with “Ozark” tying “Succession” as the most nominated drama series this year with 18 bids (double last year’s total of nine).

Over in the drama guest actor race, Bateman contends for “The Outsider’s” series opener “Fish in a Barrel,” in which his character Terry Maitland is arrested after physical evidence and eyewitnesses tie him to the grisly murder of an 11-year-old boy. This clashes with further evidence that places him at an out-of-town conference at the time of the murder, including news footage revealing Terry as a speaker. Before the available contradictory evidence can be evaluated, Terry is fatally shot by the late boy’s brother in the second episode. Even though Bateman only appears in the first two outings (and one brief flashback scene in a later one), he makes a lasting impression in his dual roles of the falsely convicted husband and father of two, and Terry’s terrifying, blood-thirsty supernatural doppelgänger (the 11-year-old’s killer), of which we, however, only get glimpses. As he also directed the show’s first two episodes — he submitted the premiere in lieu of one of his two “Ozark” efforts but was snubbed — and serves as an executive producer, he could get additional credit for wearing multiple hats.

Kumail Nanjiani (“The Twilight Zone,” 2019) and Cameron Britton (“Mindhunter,” 2018) are the latest drama guest actor nominees to attempt to win an Emmy as their show’s only citation, but both fell to performers from multiple-nominated series (“Handmaid’s’” Bradley Whitford, 2019; “This Is Us’” Ron Cephas Jones, 2018). This year, only Andrew Scott (“Black Mirror”) and Bateman fall into that category, as they are shortlisted alongside Jones, James Cromwell (“Succession”), Giancarlo Esposito (“The Mandalorian”) and Martin Short (“The Morning Show”). Bateman sits in third place in our odds, trailing Scott — who is hoping to succeed his egregious snub for reigning comedy series champ “Fleabag” with a victory — and Cromwell.