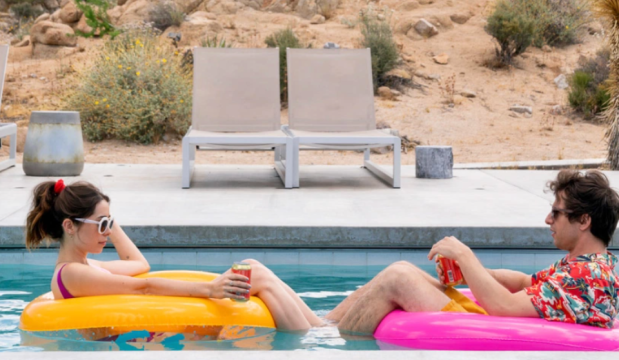 One of the most critically acclaimed comedies vying to break through at the upcoming Academy Awards is “Palm Springs,” which premiered at the Sundance Film Festival on January 26 before being acquired by Neon and Hulu. The romantic comedy starring Andy Samberg delivered Hulu its highest opening weekend viewership ever for a film, with over eight percent of the streaming platform’s subscribers watching within its first month of release.

“Palm Springs” currently holds a score of 83 on MetaCritic based on 41 reviews. On Rotten Tomatoes it has a freshness rating of 94%, with a slew of reviews naming it one of the best films of 2020. Richard Roeper (Chicago Sun Times) called is “one of the year’s best romances,” and Claudia Puig (FilmWeek) wrote, “It really exceeds at what it’s trying to do: an inventive new take on Groundhog Day. It has very likable lead performances by Andy Samberg and Cristin Milioti, and it has more on its mind than the run-of-the-mill rom-com.”

In a recent Q&A moderated by Oscar nominee Kumail Nanjiani (“The Big Sick”), Samberg was joined by co-stars Cristin Milioti and J.K. Simmons along with screenwriter Andy Siara to discuss the making of this existential comedy and how it relates to the world’s current reality of people living the same monotonous day over and over. “We succeeded at Sundance in not giving up [the time loop] aspect of it,” Samberg revealed after being asked if they hoped to keep the “Groundhog Day” element a surprise to viewers. “Once it became something that had to have a trailer cut, it kind of became impossible.”

“Palm Springs” follows two strangers who meet at a wedding, only to get stuck in a time loop that seems to have varying effects on each of the film’s characters. Siara came up with the idea with director Max Barbakow after the two took a holiday to Palm Springs and came up with the protagonist, Nyles (Samberg), a character who cares about nothing but ends up finding meaning in a meaningless world. Siara explained, “Over the years, the thing just evolved into some sort of weird meditation on love, commitment, marriages, depression and alcoholism. Sort of everything under the umbrella. It eventually became this time loop at a wedding in Palm Springs.”

Nanjiani pointed out that one of the most interesting elements of the film is watching the three main characters respond to the time loop. We see Nyles appear defeated by the loop while Sarah (Milioti) tries to escape it and Roy (Simmons) finds wholeness within it. “That was what appealed to me, ultimately, when I first read the script,” explained Simmons. “Seeing Roy in his ‘Irvine’ and having really embraced the whole thing was really a great payoff for the character.”

“That’s what was so exciting about the script,” Samberg added. “You read it and you feel all of the things at once. I’m always the most excited about something like that. We don’t have any concrete proof of time loops existing, but emotionally life is, for me at least, the way that the movie is, which is sad and funny and happy and excruciating. It’s all of those things. And something that miraculously happens in the script is it sort of blends all of those emotions together. And a bunch of different genres together. Then it somehow comes out the other side feeling like its own thing.”