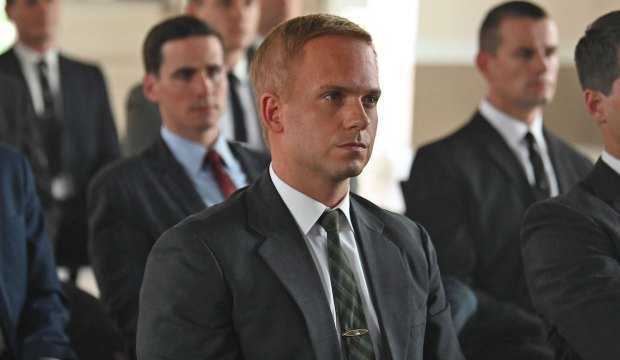 The National Geographic series “The Right Stuff” premieres on Disney+ on October 9. It’s based on Tom Wolfe‘s book about fighter pilots recruited to become NASA’s first astronauts, which was also adapted into an Oscar-winning 1983 film. Will the small-screen version have just as much awards success? One of its leading men, Patrick J. Adams, shocked us once before at the Screen Actors Guild Awards, and he could potentially do it again.

Adams broke out with his long-running role in USA’s drama “Suits” as a brilliant college dropout masquerading as a lawyer. That series was popular with fans, but didn’t really catch on with industry peer-group awards — except for Adams, who surprised by earning a nomination at the SAG Awards in 2012 for the show’s first season. That was especially impressive given how little space is available at these awards: lead and supporting actors compete together in one category with just five slots.

Here he plays the legendary John Glenn, the first American ever to orbit the Earth. That was the role played by Ed Harris in 1983, though Sam Shepard earned the film’s only Oscar nomination for acting for playing Chuck Yeager. So Adams plays a biographical role with strong name recognition in a story with a previous awards pedigree. That could help him stand out in an ever-crowded field of streaming, cable and broadcast shows. And Disney+ already established itself as a strong industry player when “The Mandalorian” won seven Emmys out of its 15 nominations.

It doesn’t hurt that Adams enters a field with a lot of vacancies. Only one of last year’s nominated TV drama actors at the SAG Awards is eligible to return this year: Sterling K. Brown (“This is Us”). Everyone else is out. Peter Dinklage (“Game of Thrones“) won last year, but his show ended in 2019, so he’s no longer in contention. And the other three nominees were in shows that won’t have new episodes in this eligibility period: Steve Carell and Billy Crudup (“The Morning Show”) and David Harbour (“Stranger Things”). So Adams may indeed have “The Right Stuff” for another ambush nomination.